Saved by one Queen and Brought Home by Another: Rimatara Lorikeet Returns to the Cook Islands 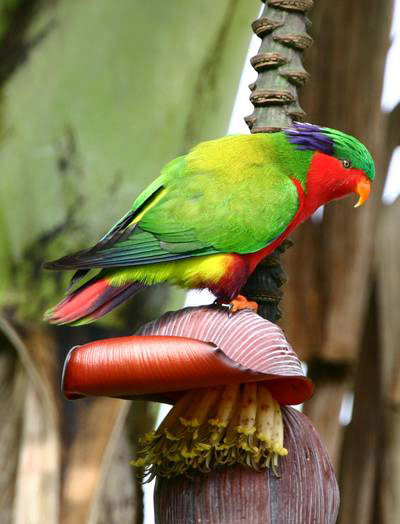 Rimatara Lorikeet: Back from the brink: Rimitara Lorikeet has been successfully reintroduced to Atiu (photo: Phil Bender).

Cook Islands, Pacific: Around 100 years ago, the Queen of Rimatara in French Polynesia imposed a tapu (taboo) that saved the last naturally occurring island population of one of the Pacific's most beautiful parrots. Now her royal counterpart, the traditional Queen of Atiu in the Cook Islands, has accompanied 27 of the birds on the journey back to her island, from which they had been absent for more than two centuries.

The Rimatara Lorikeet is green above, with crimson-red face and underparts, and purple patches on the back of its neck and on its belly. It was extinct in Atiu and the other southern Cook Islands before 1820, hunted for its brilliant red feathers, which were used in ceremonial costumes. Since then, the tree-climbing, egg-eating Black or Ship's Rat has become widely established in French Polynesia and the Cook Islands, devastating two other Pacific parrot species, the Blue Lorikeet and the Ultramarine Lorikeet.

Gerald McCormack of the Cook Islands Natural Heritage Trust led the reintroduction, after confirming that Atiu was not only free of Black Rats, but also had the same trees and shrubs as Rimatara, ensuring that the birds would find the nectar and fruit they needed.

"But the reintroduction would not have been possible without the vision and generosity of the people of Rimatara, for whom the lorikeet is a symbol of joy and wellbeing," McCormack said. "On previous occasions the removal of birds from their island resulted in the birds' deaths, a phenomenon they attributed to the tapu of their late Queen. The community finally agreed to the reintroduction programme only after they understood how the spread of the Ship Rat had destroyed island populations of the Blue Lorikeet and the Ultramarine Lorikeet, and that there was a scarcity of suitable ship-rat-free islands in French Polynesia. By agreeing, the community made it very clear that they were sharing their bird with Atiu so it could live in the wild without interference, and that it should never be transferred to any other island or country."

After their arrival in the Cook Islands, the birds and the reintroduction team were greeted with elaborate welcoming ceremonies. The celebrations went on for four days.

There have been regular sightings since. McCormack says the birds have spread over the whole 30 km2 of the island of Atiu. "As of August, sunny-day flocks are up to 13 birds and some apparent pairs are being reported. We are now organizing a community contest to find the first juveniles as evidence of breeding."