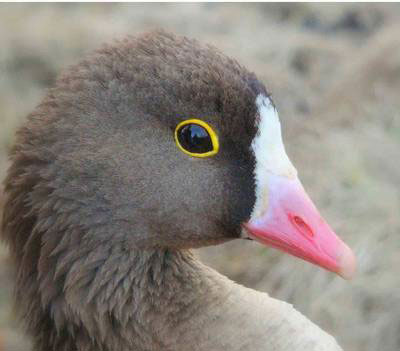 Further light has been shed on the migratory movements of the highly-threatened population of Fennoscandian Lesser White-fronted Goose, as a result of on-going satellite tracking studies financed with an EU-LIFE grant. The project, coordinated by WWF-Finland, involves Norsk Ornitologisk Forening, NOF (BirdLife in Norway), BirdLife Finland and Hellenic Ornithological Society, HOS (BirdLife in Greece).

"Satellite tracking has provided a lot of new valuable information on the routes of the geese," said Ingar Jostein Åien of NOF.

Previous satellite tracking studies had shown that the Fennoscandian population had two different migratory routes, but the final destination for some of the population was largely unknown. In this early study, satellite-tracking showed that the main flyway for the geese went from their breeding area in the Fennoscandian mountains, through the Kanin Peninsula in Russia, south through eastern Hungary and finally to wintering grounds in the Evros River Delta, on the border of Greece and Turkey.

Some Fennoscandian Lesser White-fronts were found to take a different route from the Kanin Peninsula on to northern Kazakhstan but then on to unknown wintering grounds. It was assumed that this part of the Fennoscandian population migrated further south to the Caspian Sea region and possibly into the Mesopotamian Marshes of Iraq.

However, the new satellite tracking results from three Lesser White-fronted Geese tagged this year in Norway show that, on the contrary, these two flyways are not separate - the birds rejoined with the other Lesser White-fronts in northern Greece after undertaking an impressive 'loop-migration' via the Russian Taimyr Peninsula in northern Siberia, northern Kazakhstan and the Black Sea.

With this improved understanding of the flyways, several BirdLife Partners are now co-operating on the EU-LIFE project, working together to secure stopover sites along the migratory route of the geese.

"Studies like this bring to light the importance of organisations working together when conserving migratory birds" said Yannis Tsougrakis of HOS (BirdLife in Greece). "Finding new routes and information on stopover sites gives us the tools to start conserving the sites on which these birds may depend."

The international project team recently visited the wintering grounds in Greece and had the opportunity to observe Finn and Nieida, the satellite tagged pair, in a flock of 42 Lesser White-fronted Geese at Lake Kerkini. Imre, the other adult goose that was equipped with a satellite transmitter last spring, was shot during the last days of October in the Volgograd region, Russia.

After historical declines, this small Fennoscandian population of geese in Norway, Sweden and Finland is now down to just 20-30 breeding pairs. Illegal hunting is now considered the single most important threat to the population. The project is building up a co-operation with FACE (the Federation of Associations for Hunting and Conservation of the EU) to help tackle this problem.

The results of this study build on previous information gathered during the 'Fennoscandian Lesser White-fronted Goose Conservation Project', jointly run by NOF (BirdLife in Norway) and WWF-Finland. The project was the first to use satellite tracking techniques as a means to improve knowledge and understanding of the migration routes that this population uses.

You can follow the satellite tracking and view recent observations at the 'Portal to the Lesser White-fronted Goose'.