A Beluga fitted with a special harness – fully equipped with a GoPro camera holder – has been found off the north Norway coast.

Experts have suggested the whale was trained by the Russian navy, with the harness labelled as having come from St Petersburg. Furthermore, Russia's Northern Fleet is based in Murmansk, some 415 km from Ingoya, where the whale was found. 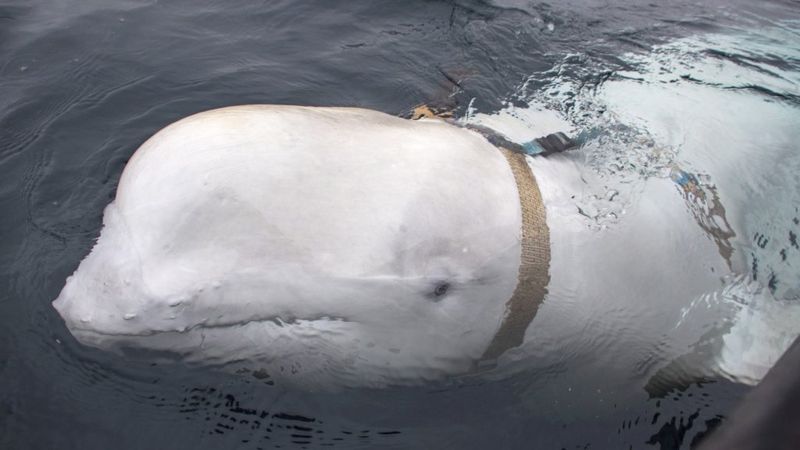 The Beluga had a GoPro holder, but no camera (EPA/Norwegian Directorate of Fisheries).

A Norwegian fisherman managed to remove it from the whale, which was tame and approaching boats off the Arctic island. Norway's public broadcaster NRK has put out a video showing the beluga's harness being released. Marine biologist Prof Auden Rikardsen told the BBC that the harness "was attached really tightly round its head, in front of its pectoral fins and it had clips".

He continued: "A Russian colleague said they don't do such experiments, but she knows the navy has caught belugas for some years and trained them – most likely it's related to that. Belugas, like dolphins, are quite intelligent – they are Arctic animals and quite social, they can be trained like a dog. The Beluga had come to the boats repeatedly for two or three days, looking for food, with its mouth open. It's a challenge now if the whale will adjust to natural food. Also, it needs to find a group. If not, it will probably still come up to a boat."

A Russian reserve colonel, who has written previously about the military use of marine mammals, shrugged off Norway's concern about the Beluga but he did not deny that it could have escaped from the Russian navy. Interviewed by Russian broadcaster Govorit Moskva, Col Viktor Baranets said: "if we were using this animal for spying do you really think we'd attach a mobile phone number with the message 'please call this number'?

"We have military dolphins for combat roles; we don't cover that up. We have a centre for military dolphins, trained to solve various tasks, from analysing the seabed to protecting a stretch of water, killing foreign divers and attaching mines to the hulls of foreign ships."