The RSPB has appealed to all wildlife watchers to look out for Hen Harriers across England's remote moorlands this spring and summer, and has relaunched the Hen Harrier Hotline in the hope of discovering where the species might be nesting.

At this time of year, male Hen Harriers perform their spectacular courtship display, known as 'skydancing', which involves a series of swoops and somersaults. If they attract a female, they must then prove their worth as a mate by passing the female food offerings in mid-air.

Experts estimate there is sufficient habitat in England to provide a home to around 300 pairs of breeding Hen Harriers. However, in 2017, there were just three successful nests, all of which were in Northumberland.

Hen Harriers are in this position due to ongoing illegal persecution. As they sometimes eat Red Grouse, they are often considered unwelcome on moors managed for driven grouse shooting. This field sport requires huge numbers of Red Grouse and some gamekeepers resort to illegally killing or disturbing harriers to protect their business.

The RSPB is calling for the introduction of a licensing system for driven grouse shooting, which would help stamp out illegal persecution and improve standards in the industry. 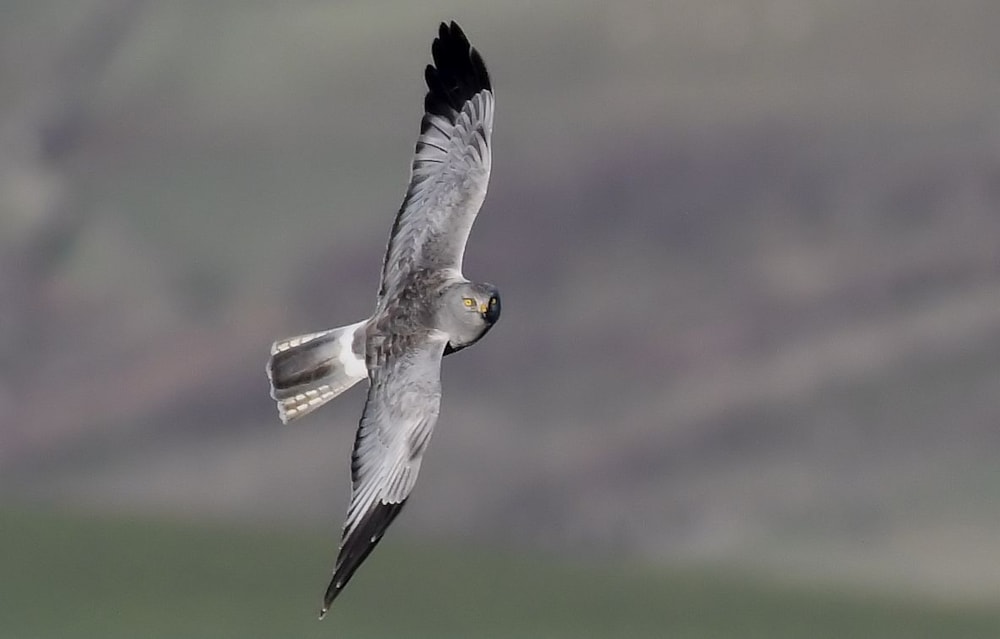 Male Hen Harriers are a spectacular sight, but persecution has rendered them on the verge of extirpation in England (Eddie Maguire).

Amanda Miller, Conservation Manager for the RSPB in Northern England, said: "The Hen Harrier is one of our most graceful and spectacular birds of prey, but it remains on the edge of extinction in England. If you see a Hen Harrier, please let us know by contacting the hotline. If we know where birds are breeding we can deploy round-the-clock protection to give the nest the best chance of success. We can also fit satellite tags to the chicks so we can find out more about where they go after they fledge and launch an investigation if they disappear."

Male Hen Harriers are an ash-grey colour with black wing-tips and a wingspan of just under a metre. They are sometimes known as 'ghostbirds' because of the paleness of their plumage. Females are slightly larger, being somewhat owl-like in appearance, and have a mottled brown plumage, which camouflages them when they nest on the ground. They have horizontal stripes on their tails, giving them the nickname 'ringtail', and a white rump.

The Hen Harrier Hotline number is 0845 4600121 (calls charged at local rate). Sightings can also be emailed to henharriers@rspb.org.uk. Reports should include the date and location of sighting, with a six-figure grid reference where possible. A description of the bird's behaviour would also be useful.

The RSPB is supporting Ed Hutchings's petition calling on the government to license driven grouse shooting; it can be found online here.