Road to recovery for rare cuckooshrike 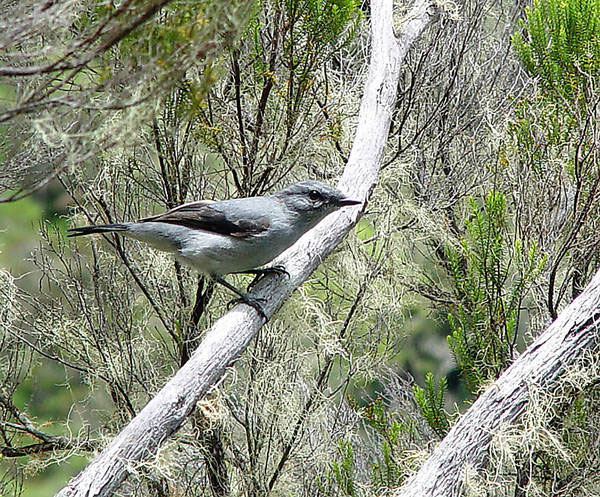 Control of predatory rats and cats is a key recommendation of the plan, and already in Réserve Naturelle de La Roche Ecrite in northern La Réunion (Indian Ocean) it has led to four out of five pairs of cuckooshrike successfully rearing chicks, compared to just two out of six pairs raising young at a nearby site without control.

"We are delighted with these initial results," said Thomas Ghestemme of SEOR, a local conservation NGO who carried out the trial. "Following Mauritian Wildlife Foundation guidelines, we set baits in grids of 7–15 ha. Before and after the poisoning, we trapped rats to get an idea of how many were present. Early on, rat numbers were so high that it was necessary to replace the poison bait weekly for five months." Cats were also trapped in the grids.

Although the population of Reunion Cuckooshrike remained fairly constant at around 120 pairs between the 1970s and the 1990s, it has been declining over the last decade. Currently males outnumber females by almost two to one, and the remaining population is estimated at fewer than 50 pairs and the species is classified as Endangered. It is thought birds once primarily occupied lowland forest, but under the pressures of habitat loss and degradation, forest fires and predation by alien invasives, the cuckooshrike has retreated to a 16 km2 patch of mountainous rainforest in the north of the island.

"Next season, we will extend the control programme to protect at least 12 nesting pairs of cuckooshrikes," says Ghestemme. "We will be joined in our efforts by staff from ONF, who co-manage the reserve, and SREPEN, an NGO who will inform visitors about recycling."

La Réunion is a French Overseas Department ("Dom"), and production of the cuckooshrike action plan was partly funded by the EU, French Ministry of the Environment and local sources in Reunion Island.