Ring Ouzels to get home improvements

Scientists at RSPB Scotland have revealed that improving habitats for Ring Ouzels in their upland breeding grounds could help halt the dramatic fall in the species’ numbers.

Scotland’s Ring Ouzel population has dropped by 36 per cent since 1999, and the species is Red Listed as a Species of Conservation Concern. These striking birds are vanishing from many of their former haunts in the rocky hillsides and gullies of the highest parts of the country. The species has been the subject of much concern and research; TV presenter and author Nick Baker wrote about this in Birdwatch's March issue.

Intensive research at Glen Clunie, Aberdeenshire, has suggested that the decline there is likely to be due to a drop in the survival of young birds in their first year, and it is thought that the low survival rate could be influenced by a lack of suitable habitat.

Ring Ouzels forage for invertebrates in short grass and a mix of grass and heather early in the summer, before switching to blaeberry and rowan berries later on. They also need access to deeper vegetation, such as heather, to hide their nests and newly fledged young. Scientists hope that creating suitable habitats at breeding grounds could provide the birds with safe nest sites and abundant foraging areas, as well as concealing young birds from predators.

“Through our long-term studies in Glen Clunie we have identified that improving first-year survival may be the key to stabilising, and eventually reversing, the population decline.

“Over the next three years we will be attempting to improve conditions for Ring Ouzels, by providing the mix of habitats that we have identified as being important for successful breeding and the survival of recently fledged young.” 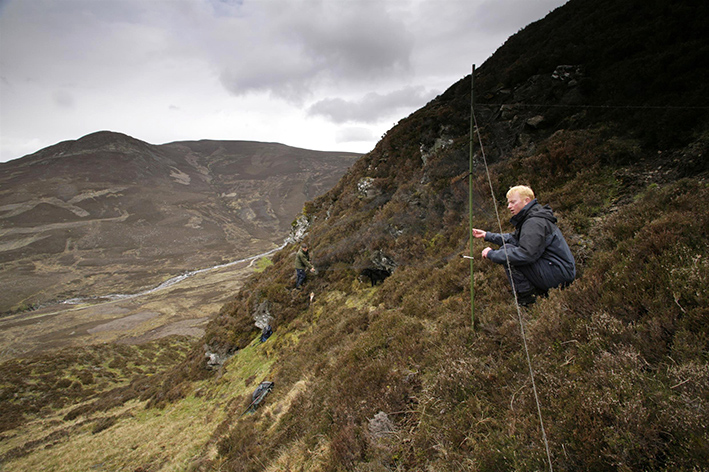