Return of the Ranunculus

A previously extinct moth has successfully recolonised large swathes of the UK thanks to wildlife-friendly brownfield sites. The Small Ranunculus, an intricately mottled grey, black and gold moth became extinct in Britain before World War II, but started to appear once again in the late 1990s. These early immigrants from continental Europe established a foothold on brownfield sites such as abandoned quarries, and spread along roadside verges. With little interference, the moth has now recolonised large areas of southeast England and become established in south Wales as well as being sighted as far afield as Lancashire and Northamptonshire.

The Small Ranunculus favours brownfield sites as they typically hold plants that the moth's larvae feed upon, such as the Prickly Lettuce and Great Lettuce. Brownfield sites such as quarries, disused railway lines, gravel pits and spoil tips are important for the recovery of this species and key habitats for many threatened and common moths and other wildlife. But in spite of their wildlife value, brownfield habitats are under-recorded and threatened by Government policy. Moth Night 2012, organised by Atropos and Butterfly Conservation, the annual celebration of moths and moth recording, is focussing on the biodiversity benefits of brownfield sites. 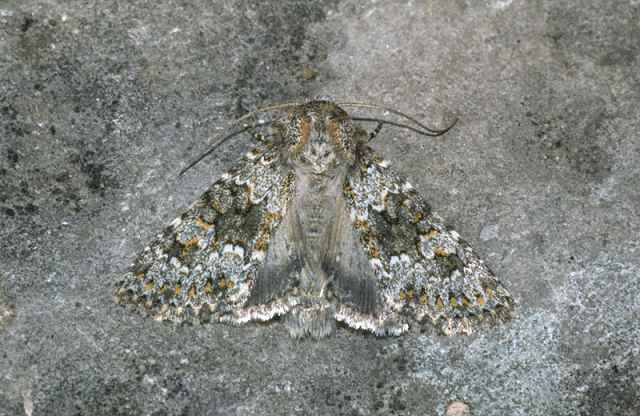 Events across the UK will survey moths found on brownfield sites, reveal important biodiversity hotspots and help map the return of the Small Ranunculus. Other moths that rely upon brownfield sites include the Six-belted Clearwing, which mimics a wasp, rarities such as the Four-spotted, Wormwood and Bright Wave and more common species like the dramatic-looking Elephant Hawk-moth and the Narrow-bordered Five-spot Burnet. Richard Fox, Butterfly Conservation Surveys Manager, said: "Brownfield sites provide some of the best wildlife habitats in the UK for moths, butterflies and other wildlife and yet are highly threatened by redevelopment and bland landscaping schemes. We hope that Moth Night 2012 will raise awareness of the beautiful moths that live in these under-rated habitats and improve our knowledge of the wildlife importance of brownfield sites."

Atropos editor Mark Tunmore said: "We hope that as many people will get involved in recording moths as possible during Britain's' annual celebration of moths by submitting sightings via the website. It doesn't matter in what environment or part of the country you live — you will have moths in close proximity and you may be stunned by how spectacular some of these are."

Moth Night 2012 runs from 21st–23rd June and will include a series of daytime searches and night-time recording across the UK.