In early March, an international workshop in Xiangshan, Zhejiang Province, China, marked the start of an ambitious plan to restore a network of breeding sites for the Critically Endangered Chinese Crested Tern, probably the world's most threatened seabird.

After more than half a century with no breeding records, four adults and four chicks were discovered in 2000 on the Mazu Islands (administered by Taipei) off the coast of China's Fujian Province. In 2004 another colony was found in the Jiushan Islands, off Zhejiang Province, but breeding failed after two typhoons hit the islands. No breeding birds were seen in the Jiushans until 2007, when eight Chinese Crested Terns and about 2,000 Greater Crested Terns returned. But the colony was raided by egg poachers, and terns have not nested there since.

In 2008 a new colony, believed to be the birds that nested earlier on the Jiushans, was discovered in the Wuzhishan Islands, 80 km to the north. They have returned to nest on the Wuzhishans annually, but nesting space has become limited, and the terns have started using less favourable sites. News of the terns has spread, increasing the risk of disturbance from photographers. 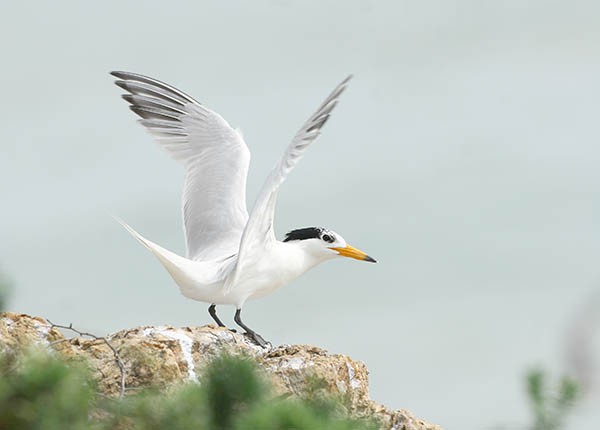 Following the poaching incident on the Jiushans, BirdLife International and the Hong Kong Bird Watching Society (BirdLife Partner) have been working with the Zhejiang Wild Bird Society on conservation education in Xiangshan. Teams of student volunteers have promoted tern conservation and persuaded their friends and families not to collect, buy or consume seabird eggs. Education programmes at schools and public events have raised awareness of the tern's plight, and seabird egg poaching has been greatly reduced. In July 2010, an international forum on seabird conservation, the first of its kind in China, was convened in Xiangshan. Inspired by a presentation on the restoration of tern colonies in the USA, (initiated by Dr. Stephen Kress of the National Audubon Society, BirdLife Partner in the USA), the Xiangshan government and the Jiushan Islands National Nature Reserve provided more resources to prevent poaching.

The Wild Bird Society of Taipei reported on their preliminary success in using Greater Crested Tern decoys to attract Chinese Crested Terns on the Mazu Islands. A small island in the Jiushans, close to the island used in 2004 and 2007, has been chosen as the restoration site. Nesting habitat will be improved and expanded, and tern decoys and audio playback systems will be deployed from early May. It is hoped that Greater Crested Terns will attempt to nest, and that Chinese Crested Tern will eventually join their colony. The island will be occupied by researchers 24 hours a day during the breeding season. The project is sponsored by the Japan Fund for Global Environment and the Ocean Park Conservation Foundation (Hong Kong), with logistical support from the Xiangshan Ocean and Fishery Bureau and Zhejiang Museum of Natural History, and a small grant from the US Fish and Wildlife Service.