Black-tailed Godwit eggs have hatched successfully, following a rescue operation by the RSPB and Wildfowl and Wetlands Trust (WWT).

Conservationists, trying to protect England's tiny breeding Black-tailed Godwit population, teamed up with local farmers to save the eggs, which were found in poor condition due to heavy spring downpours.

Collecting eggs for rear and release, known as head-starting, was already planned in the area as part of a five-year EU-funded project. When flooding forced wild birds to nest away from the safety of their wetland habitat in the Nene Washes, the project team launched a rescue operation to help save more eggs.

Rebecca Lee, Principal Species Conservation Officer at WWT, welcomed the news. She said: "Conditions were so bad that we were concerned that they might not survive. A number of the eggs that we did manage to collect were in such bad condition that they resembled muddy potatoes. Thankfully, the majority of these eggs have shown signs of life and many have hatched successfully, despite our reservations.

"Flooding forced our ground-nesting birds off important nesting areas and they have been laying their eggs on nearby farmland where mud is widespread and tall crops can hide potential predators. Thankfully we have been able to work together with the landowners in the area to avoid the worst outcome." 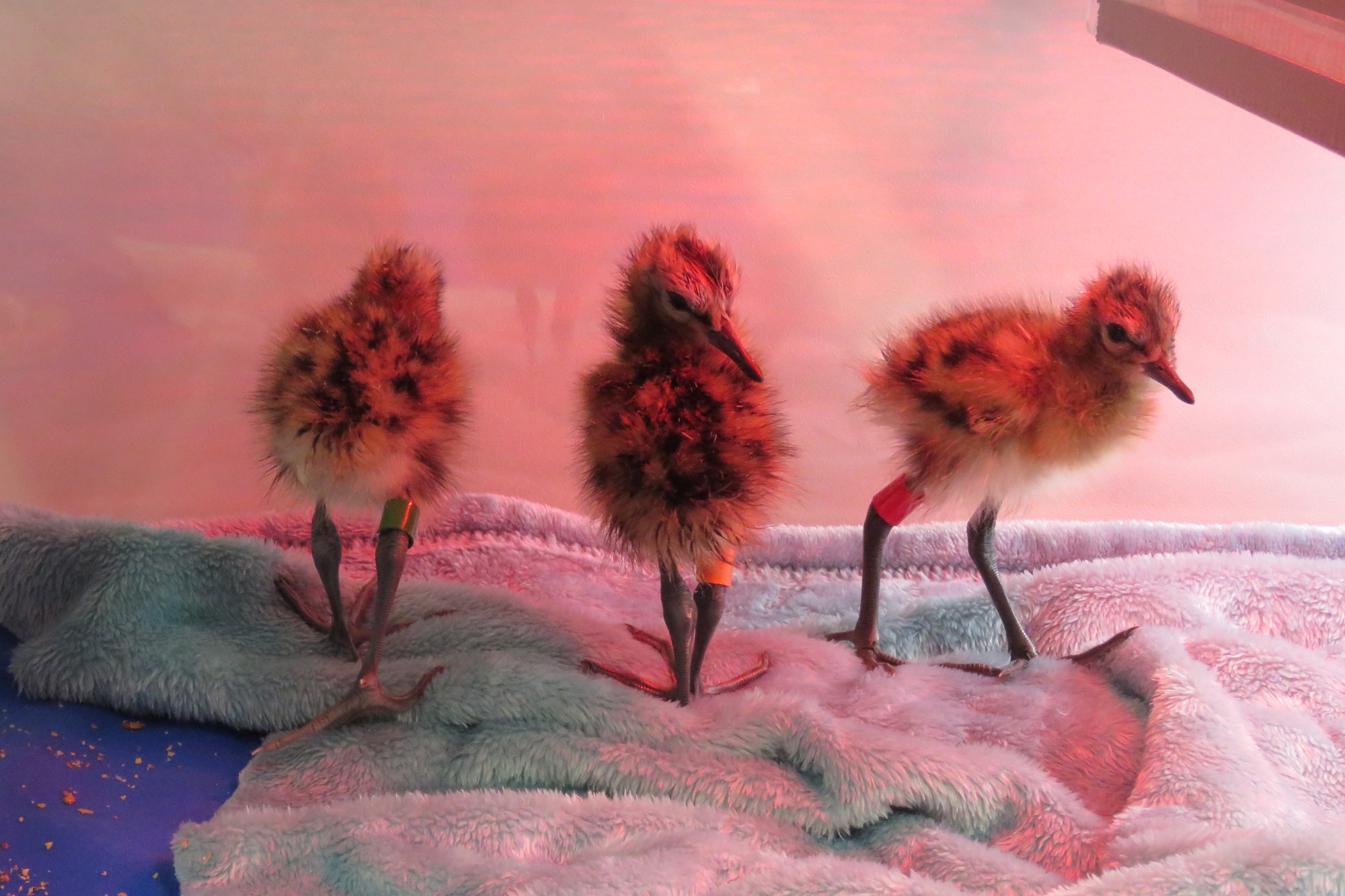 Three of the godwit chicks to hatch from the eggs rescued during torrential spring conditions (WWT).

A total of 32 eggs were collected from farmland as part of the pioneering nature-conservation scheme Project Godwit – a partnership between WWT and RSPB, which aims to restore the UK breeding population.

Hannah Ward, RSPB Project Manager at Project Godwit, added: "The decision to intervene was not taken lightly. The extreme weather and the dire state of these precious, rare eggs meant they had almost no chance of survival in the wild. Luckily, as our project already includes helping godwits by collecting eggs and head-starting chicks, we were in a position to also help these extra eggs.

"With less than 50 pairs of godwits breeding in the UK, every egg that successfully hatches could be critical for the future of the population. This was a real team effort and we thank the farmers who worked closely with us to rescue the eggs."

The Nene and Ouse Washes are the two main breeding sites for Black-tailed Godwit in the UK. The species' numbers at the Ouse Washes are now critically low but it is hoped that head-starting, in combination with the creation of suitable wetland habitat, could restore the population to numbers previously seen in the 1970s.

The washes were created in the 17th century as flood storage, protecting surrounding farmland and residential areas from flooding when river levels are high. They also provide internationally important wetland habitat for an array of wildlife.

Changing climatic conditions, as well as pressures from increased run-off from housing developments upstream, means excess water is flooding the washes in spring and early summer, when ground-nesting birds use the area. WWT and the RSPB are helping to address this by providing alternative nesting sites – flood-free areas of wetland habitat created adjacent to the washes.

More information on Project Godwit can be found at projectgodwit.org.uk.