A mountain rescuer abseiled down the side of a 27 m viaduct to save a trapped Raven after it became caught in its nest.

The fledgling bird was spotted attempting to fly away from under the arches of Smardale Gill Viaduct, near Kirkby Stephen in Cumbria. Kirkby Stephen Mountain Rescue Team was called out to help by Cumbria Wildlife Trust on Friday 14 May. 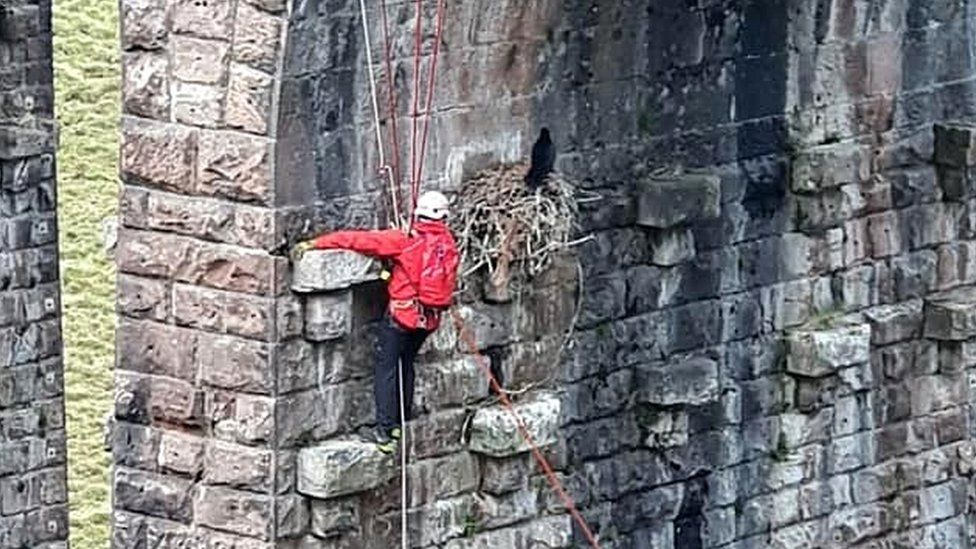 The freed bird was said to have appeared uninjured but "a little weak". Team leader Adrian Cottrell was lowered by rope to help untangle the raven, which took around five minutes. He said the team was keen to use its skills to help anyone in distress and was moved to help after spotting the bird in difficulty.

"I think in this instance it was unfair just to leave it to struggle and come to quite a grim end," he said. "So I think it was a good thing to go in there and use the skills and equipment that we have got to do something good for wildlife."

Mr Cottrell said because the location was difficult to reach, "careful manoeuvring and rope-work" was needed to access it safely. "We do quite a few animal rescues but it's not very often you have to go and rescue a bird," he continued.

"It was a pretty big bird. It was relatively calm, it didn't put up much of a fight, it was quite relived to be helped out. It didn't look injured in anyway, it just sat there so we just backed off and left it."