Removal of exotic figs will aid shearwaters in Portugal

Invasive Hottentot Figs native to South Africa are crowding out Cory's Shearwaters in Portugal, but now BirdLife is undertaking a concerted removal project.

Hottentot Fig is recognisable by its large yellow or light pink flowers, and is also known to the public as Ice Plant or Pigface. It has been introduced in several countries, including some around the Mediterranean, for medicinal and ornamental purposes, and to control soil erosion. However, its impressive propagation and seed production rates then led to quick colonisation of vast areas, and the Hottentot Fig became an invasive species in Portugal. It is now considered one of the 100 worst invasive species on the planet.

Just how destructive is it? By growing uncontrollably, Hottentot Fig dominates the ground completely, forming dense vegetation carpets that are practically impenetrable to native plants. The soil covered by this plant suffers chemical alterations, which in turn affect the germination, survival, growth and reproduction of native vegetation. 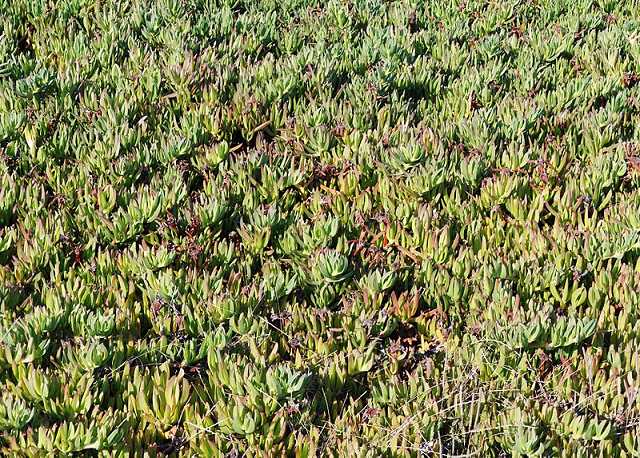 Hottentot Fig carpets the ground, preventing most other plant species from growing and closing up cavities used by nesting seabirds (Photo: Alvesgaspar/wiki commons)

The history of Hottentot Fig on the Berlengas — an archipelago off the Portuguese coast that hosts seabird colonies — goes back to the 1950s. At first, it was planted in fishermen's neighbourhoods, but with no limits to its propagation it rapidly spread throughout the island, helped by optimal environmental conditions, and seed dispersal by Black Rat, European Rabbit and Yellow-legged Gull.

Hottentot Fig is a major threat to the conservation of rare and endemic plants such as Hoop Petticoat Daffodil and Berlengas Sea Thrift, whose slow growth is no match for the fig. Hottentot Fig has also taken over many of the cavities available for Cory's Shearwater to nest in, and the plant's dense leaves and strong roots make it impossible for the seabirds to dig new nests in the soil.

Since the beginning of the LIFE Berlengas project, SPEA (BirdLife in Portugal), with the help of its partners and many volunteers, has been removing the invasive Hottentot Figs from Berlenga island, especially in the slopes of the Carreiro do Mosteiro, the camping area and in the Flandres area. This removal is done manually and is carried out along the contour lines of the island's slopes. The removed plants are rolled up and left to dry on top of the Hottentog Fig carpets directly below.

Up to 40 volunteers and technicians have been working to remove the species, and SPEA aims to have removed all the Hottentot Figs by 2018, to finally see the slopes of the island of Berlenga adorned with its native vegetation and peppered with the nesting burrows of Cory's Shearwaters.