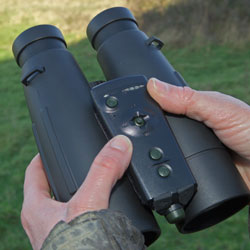 RememBird is so light and tiny that it can be attached to your binoculars and you barely notice that it's there - it sits neatly under the focussing wheel of most roof-prism binoculars and weighs less than 50g.

Would you be interested in having a lightweight voice recorder for recording your sightings while you are in the field? Or how about having a lightweight piece of kit that you can carry in the field that enables you to listen to the songs and calls of any European species? Or maybe you'd like a sound recording kit to record any bird sound you hear so you can later play it back to an expert to confirm what species it was?

Well, it's possible to do all of those things using a single gadget that is so light and tiny that it can be attached to your binoculars and you barely notice that it's there. (It sits neatly under the focussing wheel of most roof-prism binoculars and weighs less than 50 grammes). This gadget is called RememBird and could be ideal for anyone who wants to do any of the things listed above.

If you're keen to keep spoken notes while you're in the field, you might already have a lightweight Dictaphone. The RememBird has several advantages over a Dictaphone; it's permanently attached to your binoculars so you don't need to keep taking it out of your pocket; there's no danger of you putting it down or losing it; and you don't have to take your eyes off whatever you are looking at in order to make notes - great for doing a field description. As a voice recorder it is invaluable for anyone involved in censusing birds. It saves a lot of time fiddling about with a notebook, and means you can keep your eyes on the mixed flock you're trying to count.

If you want to be able to listen to pre-recorded bird sounds in the field you could use an MP3 player such as an iPod and load it with either your own sound CDs or with the files in the BirdGuides iDentify series. Again, the RememBird has the advantage of being 'part of your binoculars' rather than a separate piece of kit. You might imagine that it will be difficult to navigate to the sounds you want to hear since there is no screen to show what is being played, but the designers have come up with an ingenious idea to playback lists of sounds so you can just press 'go' when you hear the name of the letter or species or sound type you want. This works remarkably well given its limitations, but there's a tendency consistently to 'just miss' the item you want so you end up trying to flick backwards to go through the menu again. I found this a little tedious and my patience ran out completely in my efforts to find Goldcrest - there seemed to be quite a few species missing from the 'G' section or, at least, I couldn't find them. It's possible that with practice you could get really good at finding sounds in the RememBird but personally, I found it to be too messy; if I just wanted a tool for listening to bird sounds in the field, I'd stick to an MP3 player, especially if you have one that's as easy to use as an iPod.

These first two functions of RememBird are not unique, though it's certainly useful to have them in such a convenient portable format. In my opinion, what will tempt birders into buying RememBird is the third function - the ability to do sound recordings of any bird you hear. This is normally something that would require more complex and expensive kit including a microphone, something to record onto and a cable to connect them - too much clutter and cost for most birders to bother with. But the RememBird provides a perfectly acceptable means of recording bird sounds without any of that hassle. This means that if you're not sure of the identity of a Marsh Tit/Willow Tit or a Yellow-browed/Hume's Warbler you can just press a button on your binoculars and 'hey presto' you can have a recording of its call that can be used to confirm the ID. There's even an 'always on' facility so if you are watching a possible Blyth's Pipit you can set the RememBird to be ready to record its call. Then, when the bird flies, you have 4 seconds to press the record button as the recording will 'start' 4 seconds before you pressed the button! I'm sure this facility is going to prove invaluable to the whole process of accepting/rejecting records. In much the same way that digiscoping has enabled birders to keep a record of what they see through their scope, this will enable them to record what the bird sounded like too.

To their credit, the makers of RememBird are reluctant to exaggerate this facility. The manual says the kit is primarily intended for making notes and listening to pre-recorded sounds with the bird-recording facility as a secondary capability. They emphasise that to get quality recordings you need 'proper' equipment including a directional microphone. However, birders are used to the idea of taking and keeping 'record shots' - photos of birds that are nowhere near good enough to publish but perfectly acceptable as proof that it was that species - and the sound recordings you can make with this kit would be similar in function. I had a go at recording a range of species at various distances and found that the microphone did pick up most of the sounds I could hear. In some cases (a calling Goldfinch at about 12 metres and a singing Wood Pigeon at 50 metres) the recording was barely audible but was still clear enough for the species to be identified. On that basis, I can see the RememBird becoming a really useful tool for any birdwatchers who want to confirm the identity of the species they find.

The accompanying software is very well done. Basically you connect up the RememBird and the software will automatically download and list all the sound clips in the order that you recorded them. Each clip is accurately time-stamped and you can play them through one by one or edit, trim and annotate the clips.

The price of £145 (plus £45 if you want the pre-recorded library of European birds) might seem a bit steep but then it might make the difference between getting your next Short-toed Lark sighting accepted or not!