Sightings of three Short-haired Bumblebee workers at the RSPB's Dungeness nature reserve mark a new milestone for a reintroduction project aimed at bringing this native species back to the UK.

Short-haired Bumblebee was declared extinct in the UK in 2000, their demise almost certainly attributable to the lose of 97% of Britain's wildflower meadows. The species was last recorded at Dungeness in 1988.

Each year since 2012 around 50 queen bees from Sweden have been released on the Dungeness reserve as part of this pioneering project, led by the Bumblebee Conservation Trust (BBCT), RSPB, Natural England and Hymettus. Consistent sightings of worker bees over the last three years reveals that the queens have successfully nested and produced young, a strong indication that the bees are finding sufficient food to build colonies. This year the bumblebees were spotted on four consecutive days, which is a first for the project. 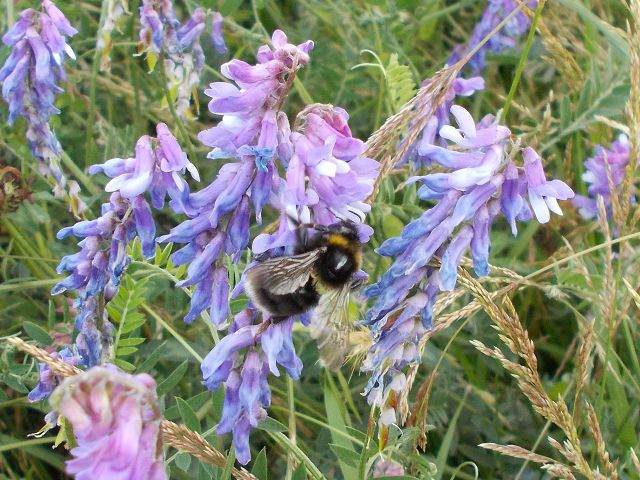 BBCT's Dr Nikki Gammans, Short-haired Bumblebee Project Manager, said: "This is a thrilling discovery and shows that conservation for bumblebees really can work. Populations of at least three other rare bumblebees not recorded for over 10 years are now found in locations across the release zone, and their abundance is increasing across south Kent and East Sussex."

The project has massive support from over 100 landowners and the local community in the Dungeness and Romney Marsh. Thanks to farmers and conservation groups, around 1,000 hectares of flower-rich habitats are being managed for the bees, helping several other rare bumblebee species and many pollinators too.

Jon Curson, Senior Invertebrate Specialist with Natural England, said: "This exciting project shows not only that it is possible to re-introduce bumblebees back into the English countryside with careful planning, but also shows the importance of working with landowners to bring back the flower-rich habitat that they provide, often through Higher Level Stewardship and now the new Countryside Stewardship agri-environment schemes."

Dr Jane Sears, RSPB Biodiversity Projects Officer, said: "It is fantastic that the bees are thriving on our reserve and a great reward for the all the effort we've put in to restore flower-rich meadows there. By providing a variety of suitable flowers from spring to late summer we are giving them the best chance of completing their life cycle and to expand into the wider countryside."

Paul Lee, Research Coordinator for Hymettus, said: "The progress made with the reintroduction project builds on the solid foundations of earlier bumblebee habitat conservation efforts in Kent. It also demonstrates the importance of sound scientific research in invertebrate conservation especially at a time when we are having to target diminishing resources more effectively."

The conservation of all bee species is crucial to our economy as they are important pollinators of many of our wildflowers and high-value agricultural crops. Everyone can make a real difference in helping bees and other wildlife simply by buying plants which are rich in nectar and pollen.