Despite early fears about the impact of the worst winter for three decades on Red Kites in northeast England, it proved to be a good breeding year with more occupied territories and a small increase in fledged young. This year was also the first breeding season where monitoring was undertaken by the Friends of Red Kites (FoRK). The organisation is made up of former volunteers from the Northern Kites project, which released 93 kites from the Chilterns over a three-year period up to 2009.

Early surveys revealed 27 occupied territories, mainly in the re-introduction area of the Derwent Valley of Gateshead and a small number in adjoining areas of Durham and Northumberland. Nineteen pairs laid eggs and 13 went on to fledge a total of 24 young, a very good result bearing in mind the severe winter when the Kites had endured over a month of snow cover, ice and freezing temperatures. 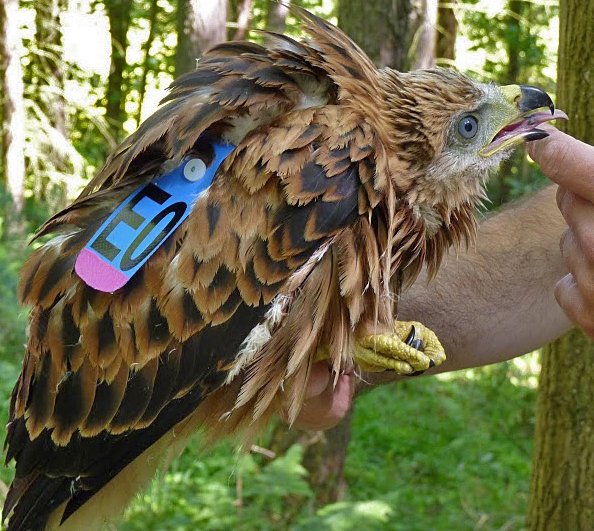 The results compared well with 13 pairs and 20 young in 2009, when conditions in the run-up to the breeding season were more favourable. Thirteen of the 24 young were ringed and wing-tagged by monitoring team members Keith Bowey, Ken Sanderson and Ian Kerr. A further youngster was ringed but its wings were not developed sufficiently for tagging. The 10 others that fledged were not ringed or tagged because they were either too large to handle safely when sites were visited or were already out of the nests. The 2010 youngsters were fitted with mid-blue tags with black lettering on the right wing with the normal northeastern project tag of pink on the left. Anyone seeing a tagged kite can report it through the FoRK website or via their County Recorder. 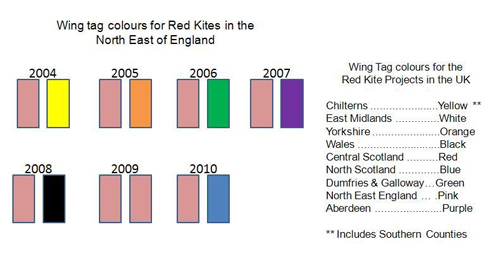 Wing tag colours in use in northeast England (Graphic: FoRK).

Five pairs failed during incubation and one when they had a small chick, compared with three incubation failures in 2009. One of these pairs may have deserted because of unintentional disturbance by children and teenagers building a cycle circuit close to the nest, one of the hazards facing a species nesting in public woodlands. The four others appear to have failed through natural causes, involving birds that were incubating early in the season and may not have been in good breeding condition after the severe winter. Pairs that produced clutches slightly later and had a more time to recover were much more successful.

Several other pairs built nests but did not lay eggs. These included young pairs who constructed rudimentary nests (obviously first attempts) and others who completed nests but then moved away, in one case after continual harrying by local Carrion Crows. Other pairs displayed and showed territorial behaviour but no nests were found. However, those knowing the area involved with its huge patchwork of woodlands and plantations, many eminently suitable for Red Kites, will understand the problems of finding all nests. The team is fairly certain that a small number of other breeding pairs went undetected, so high priority will be given to counting the untagged juveniles attending this year's autumn and winter roosts. 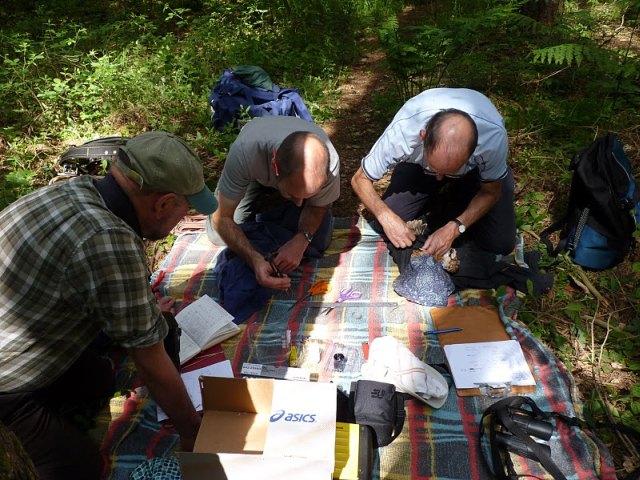 The team ringing, tagging and processing the birds below the nest. (Photo: FoRK)

Among pairs, both successful and unsuccessful, several 'divorces' were evident with birds appearing with new partners at nest sites. As in previous years, various odd items of decoration were found at nests. These included the furry head of a small toy horse completed with bridle, a blue and white woollen hat, part of a cardigan and a pair of tights. There were no England soccer flags this year, although if the World Cup had been played a little earlier the Kites might well have taken advantage and picked up many flung away in disgust by fans!

One worrying aspect of 2010 was that all successful breeding took place in the 'core' re-introduction area, with little sign of birds spreading out to colonise new districts. For example, in Northumberland, where two or three pairs bred in previous years, a single pair failed at the chick stage in suspicious circumstances. There was no breeding success southwards into Teesdale where the first "out of area" nesting occurred in 2006. The sole Northumberland pair hatched one youngster at a previously successful site at the Highland Cattle Centre at Whittonstall. When the chick was about a week old the absence of activity at the site resulted in the landowner checking and finding the body of the female on the ground close to the nest tree. At that stage there was no sign of the youngster, which had probably been predated. A month later the body of the male was found on a nearby estate managed for Pheasant shooting. In view of the confirmed poisoning of two Kites in the adjacent Hexham area early in 2010, the bodies were sent for post-mortem examination and Northumbria Police were informed. The results of toxicology testing are awaited. 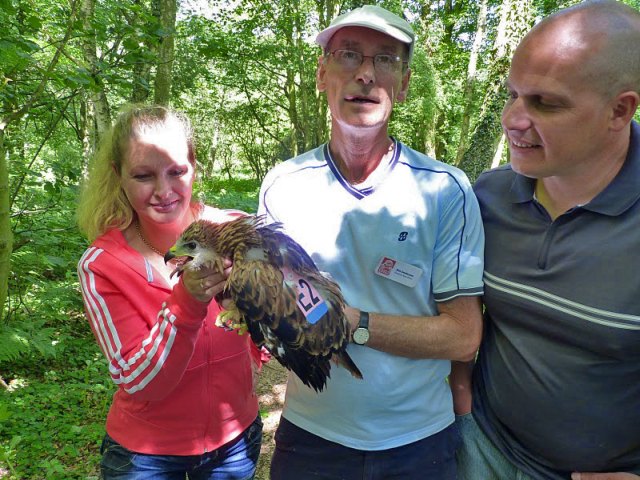 FoRK chairman Ken Sanderson showing a chick to a local couple who put the team onto a nest in a wood near their home. Inviting local people and landowners along is great PR for the project (Photo: FoRK).

Movement between re-introduction areas was also evident during 2010 with a female from the central Scotland population involved at a successful nest site in the Derwent valley. Two northern kites were involved in pairings in Yorkshire, which raised two and three chicks respectively. More details of the northeast's Red Kites and events organised by FoRK are available on the website.