An investigation has been launched by the RSPCA after a passer-by found a Red Kite with broken legs in Aberystwyth, Ceredigion.

The appeal for information began after the bird was found to have been caught by an illegal gin trap. RSPCA Cymru was alerted after the raptor was found bleeding and with broken legs still in the trap on the B4340, near New Cross and Abermadwr on 7 May.

The caller who found the bird transferred the animal to a local veterinary practice, where it was confirmed that its legs had been broken by the trap. Sadly, the vet was left with no choice but to put the bird to sleep to prevent further suffering. 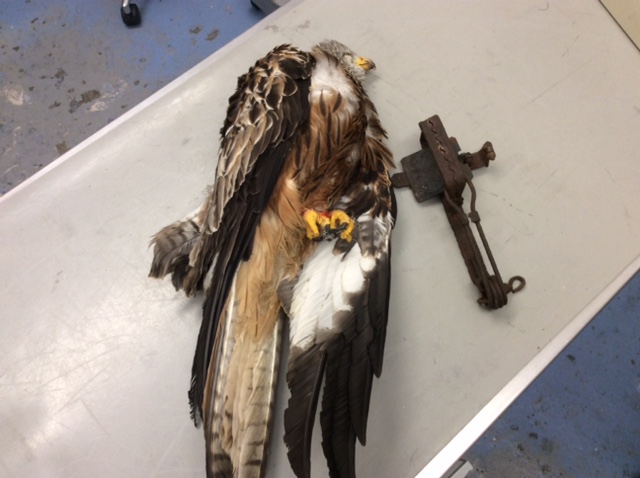 The Red Kite's legs were fatally broken in the illegally set gin trap in Aberystwyth (RSPCA).

Gin traps such as the device used in this incident are spring-operated and illegal to set and use, although not illegal to own. It is also against the law to set any spring trap in the open or on top of a post. The charity says it is following a line of inquiry about the placing of the trap but is calling on the local community in Aberystwyth to get in touch should they have any relevant information.

RSPCA inspector Keith Hogben said: "These gin traps were made illegal to set many years ago and yet shockingly are still being used to catch animals. They are indiscriminate and sadly this Red Kite is the latest victim. The potential consequences of these devices for animals and humans are so severe. I shudder to think what could have happened had a toddler, for example, crossed the path of this trap.

"We are following a line of inquiry on this incident but are eager for more information to come to light as to the circumstances behind this illegal trap being put down.