Shropshire's first Red-flanked Bluetail was filmed by camera trap at an undisclosed site south-west of Shrewsbury in early November.

The rare Siberian visitor appeared on two different cameras during routine Pine Marten monitoring in an area near Stiperstones during a 15-minute spell, but wasn't recorded subsequently.

Stuart Edmunds, who heads up efforts to monitor Shropshire's Pine Martens, discovered the bird while reviewing footage. He told BirdGuides: "The appearance of this rare UK visitor on camera trap took me by complete surprise. I'm accustomed to watching through endless videos of Blackbirds, European Robins, Grey Squirrels and Wood Mice as I search for recordings of Pine Marten, which is another species only recorded in Shropshire thanks to camera traps.

"I usually check my camera traps in the field by transferring data from a SD card to my laptop, then sit down under a tree to trawl the weeks of video clips. On this occasion at the end of November, I was time constrained, so had to download the clips to my laptop to view at home later.

"That evening was spent watching around 1,200 15-second videos in fast-forward. Having watched millions of clips over the last decade, I tend to notice any unusual wildlife even if it only appears fleetingly. On the camera trap that recorded the bluetail, there were many clips of young robins stopping to preen on a prominent rock. On one of the clips some different behaviour caught my eye, as an apparent robin caught an insect and paused briefly in front of the camera trap. I stopped the footage and rewound it to the start, purely to get a glimpse of what the insect was that had been caught – but on watching the video in normal speed, it was quite clear that the bird wasn't actually a robin!

"The bird's colours weren't immediately obvious on the replay and I had wondered if it was actually just a robin with unusual plumage, but it was only by finding another clip of the same bird, recorded on another camera trap 10 m away, that the blue tail became more obvious.

"Completely shocked by the discovery, I was unsure of how best to deal with it due to the sensitivity of the site for Pine Marten monitoring. The land there is privately owned but I have been fortunate enough to have permission to access it to keep an eye on the martens on the proviso that I avoid attracting attention to the site. After consulting a birder friend, we decided that the record was too good to keep hidden, but agreed that the location must be kept secret to avoid disturbance to the site, which would jeopardise my pine marten work.

"I can however say that the record was near The Stiperstones, but the twp clips were recorded a month before I checked the camera and there were no other clips afterwards. This discovery reinforced how important camera traps have become in wildlife monitoring. I wonder what my cameras will record next!" 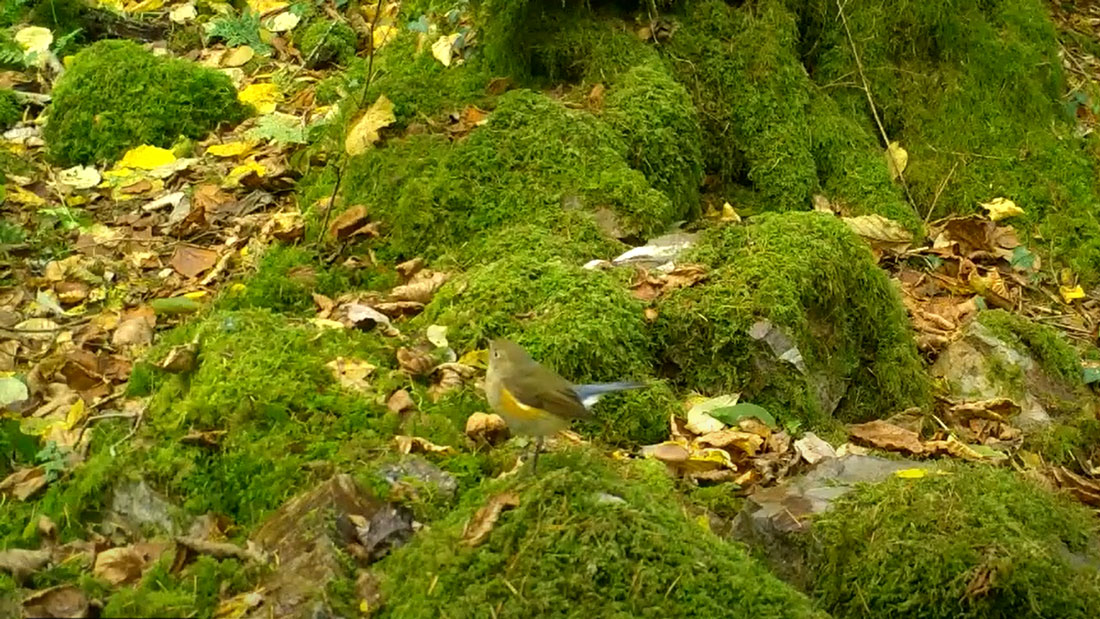 A still from Stuart's video footage.

This is the second time in as many years that Red-flanked Bluetail has been caught on camera without actually having been seen by people. In October 2020, a bluetail was filmed at Pensthorpe NR, Norfolk, by a camera set to monitor a fence on the reserve.

Red-flanked Bluetails were relatively few and far between in Britain in autumn 2021, although the summer once again saw breeding records smashed in Finland.

You can followed Stuart Edmunds and his Pine Marten work on Twitter: @PinemartensUK