A spring hunting ban in a region of south-west Russia will have a profoundly positive impact on waterbirds using the area, say conservationists.

Significantly, this includes the Kuma-Manych depression, which is a key spring staging area for the entire world population of the globally threatened Red-breasted Goose among many other waterbirds. Hunting – both intentional and accidental – has long been one of the problems facing Red-breasted Goose both on its wintering grounds and along its migration route, so the ruling provides a major boost for the conservation of the species.

The changes came into force on 1 January 2021, and outlaw spring hunting in the Republic of Kalmykia and the Stavropol Territory, which covers the Kuma-Manych depression. In addition to a spring hunting ban that has been imposed in the Rostov region for a few years now, this wide area of south-west Russia becomes a safe haven for migrating waterbirds in spring. 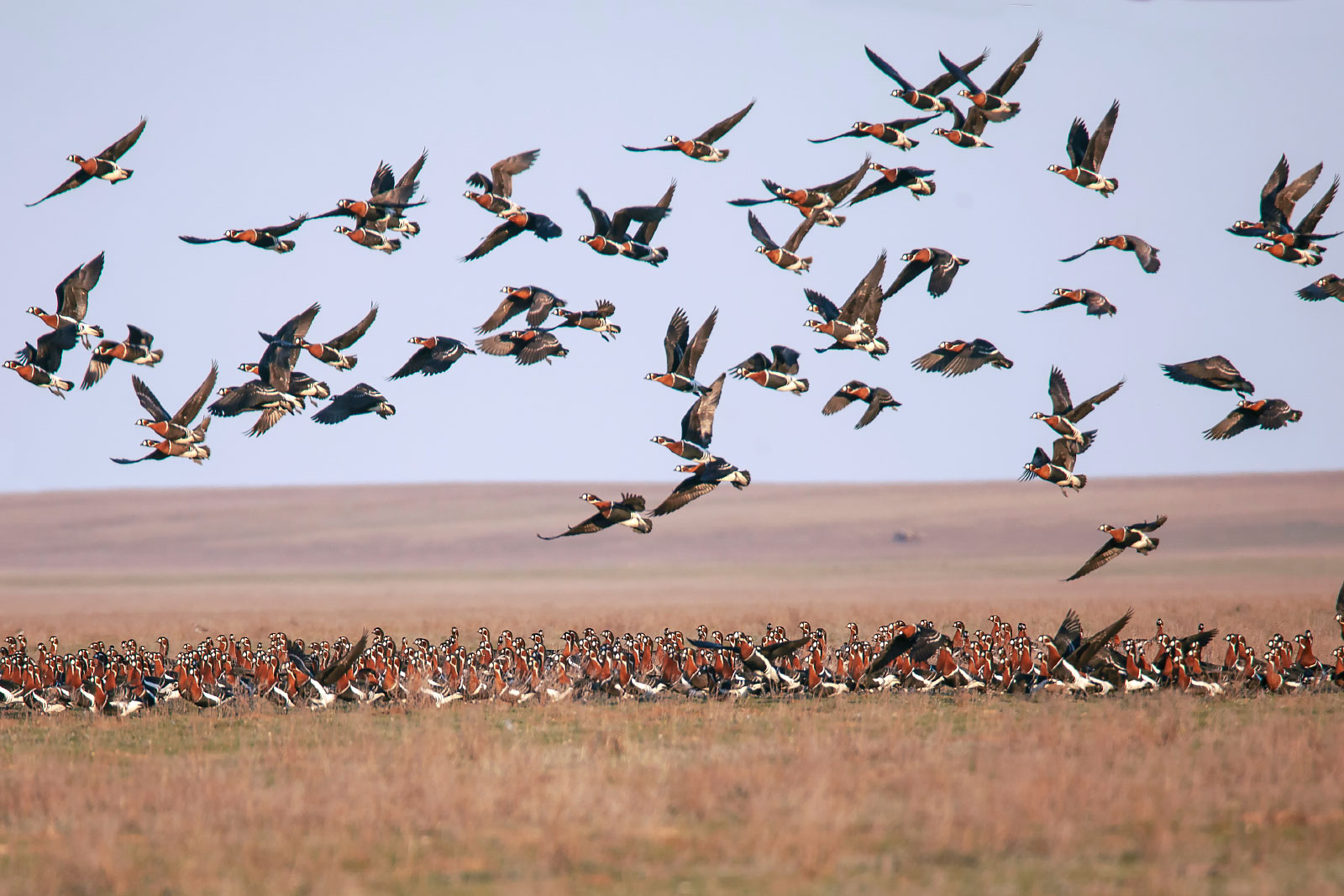 The entire world population of Red-breasted Goose stages at the Kuma-Manych depression in spring. This area will now be protected from hunting at this crucial season, benefiting the globally threatened goose (LIFE for Safe Flight).

The relevant orders were signed by the Governor of the Stavropol Territory, Mr V V Vladimirov, and the head of the Republic of Kalmykia, B S Khasikov. This became possible thanks to the constructive dialogue between the Ministries of Natural Resources of the Republic of Kalmykia and the Stavropol Territory and the LIFE for Safe Flight project partners – Chernie Zemly Biosphere Reserve management authority and the Working Group on Anseriformes of Northern Eurasia. This initiative was also supported by the hunters themselves, because the ban of spring hunting lead to improved adjustment of the autumn-winter period being prolonged till 16  January instead of 31 December.

The ban of the spring hunting in key stop-over regions in Russia has been one of the LIFE for Safe Flight project's key aims since the very beginning and the achievement marks the final success following the spring hunting ban in 2019 and the restrictions introduced in 2020, along with the COVID-19 pandemic regulations.

Now the key staging area for the Red-breasted Goose – as well as thousands of other geese and waterbirds – will be protected from hunting during the spring migration season on a permanent basis.

The project said in a statement: "We expect this to significantly reduce the possibility for accidental and intentional illegal shooting of the species during spring migration and the associiated disturbance for the migratory flocks. This is arguably one of the greatest successes and conservation achievements of the LIFE for Safe Flight team and partners  and will have a long-lasting legacy well beyond the lifespan of the project."