An international partnership has been helping re-establish wildlife conservation and education in Iraq over the last three years.

Despite regular gloomy news of continuing troubles in post-war Iraq, there are still moments that highlight the resilience and determination of the Iraqi people to treasure and protect their natural heritage.

For the last three years the country's leading conservation NGO, Nature Iraq (a BirdLife Partner), has been undertaking a wildlife study and education programme in Iraqi Kurdistan, supported by DEFRA's Darwin Initiative, and co-partnered by the Royal Botanic Garden's Edinburgh-based Centre for Middle Eastern Plants (CMEP) and BirdLife International. 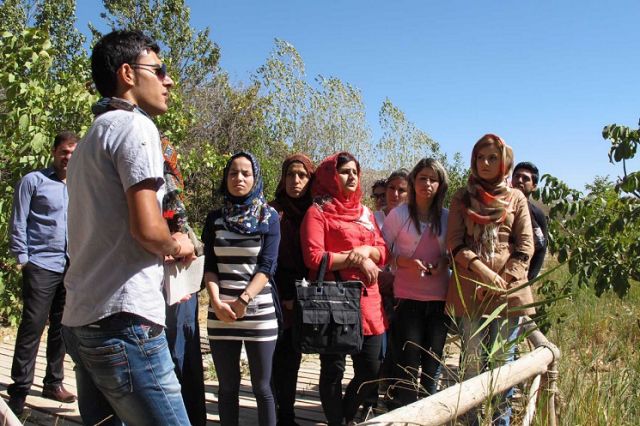 An on-line course in biodiversity and conservation, run in conjunction with the University of Sulaimani, is now in its third year. To date more than 60 students have successfully completed the course, while a further 60 students and others involved in conservation have signed up for the latest one.

Now that mobile phones are widespread, a citizen science project to study butterfly and dragonfly distribution was launched last autumn. Enthusiastically received, photos of these two insect groups are now being sent for identification from all over Iraq. Nature Iraq and Darwin have assembled a good team of international experts to help with difficult identifications, and in a pilot study Nature Iraq has already identified four new dragonfly species for the country.

A main focus of the Darwin Initiative has been the majestic mountain of Piramagrun. Here a comprehensive study of the plants has been undertaken. This has more than doubled the number of species known from the area to more than 650 and includes several species new to science. An interactive electronic image-based guide to plants is nearing completion. A study of land-use practices on Piramagrun will help guide the development of a conservation action plan, while the mountain has also been the focus for student field visits, and local schools have developed some exciting projects such as the making of nest boxes.

As well as this, a unique bird identification App for the 130 bird species of Piramagrun mountain is currently being tested in the field by Iraqi students. If the model proves successful it could be used for other sites in the Middle East to encourage an interest by local people.

CMEP's director Tony Miller, explained: "The project has been an opportunity to develop some practical and innovative conservation tools and has been successful at bringing environmental understanding to the wider public in Iraq. It is a huge pleasure to work with enthusiastic Iraqi colleagues in such a varied and beautiful environment."

Bwar Khalid of Nature Iraq added: "Throughout last three years we have been working as a team to reach our goals and there have been lots of achievements, but we still have a lot of hard work to do in order to protect, restore, and preserve Iraq's natural environment and rich cultural heritage. I hope we can do more projects and activities in the future, especially in our country where there was nothing except war and destruction."

Their sentiments were echoed by BirdLife's Middle East Director, Dr Ibrahim Khader: "We are proud that Nature Iraq has developed these exciting initiatives, many of which will influence conservation education actions throughout the Middle East," he concluded.

More information can be found at www.natureiraq.org.