BirdLife International scientists monitoring migrating Sociable Lapwings in the heart of the Great Steppe have recently discovered the largest single flock seen in Kazakhstan since 1939. The study team from BirdLife's Kazakhstan Affiliate ACBK who, with support from RSPB, are conducting breeding research and migration monitoring around Korgalzhyn, in central Kazakhstan, found the record flock of more than 500 birds on 16th August at Arykty, about 35 km east of their main study site.

"Our autumn migration monitoring kicked off with a bang when we located a huge flock of Sociable Lapwings at Arykty," reported ACBK project leader Ruslan Urazaliyev. "It is often quite difficult to accurately assess the size of an active flock but during my first count I recorded 523 birds and a little later my colleague Timur, who was watching from another viewpoint, estimated that by then it probably contained more than 650 individuals!" 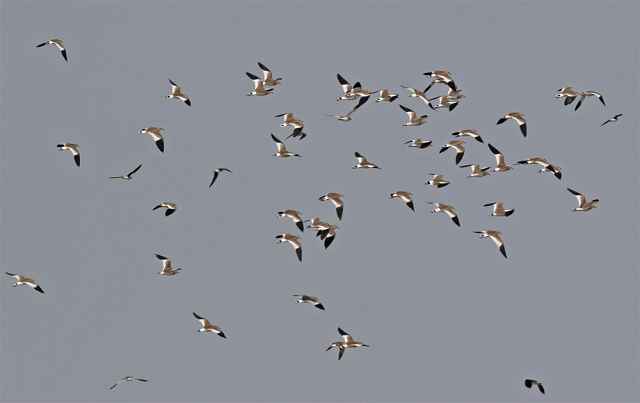 Part of the record flock of Sociable Lapwings recorded at Arykty (Ruslan Urazaliyev).

Data gathered in previous years indicates that many local breeders from around Korgalzhyn depart during July. It is therefore most likely that the majority of the birds in this record flock had originated from breeding sites further east in the Steppe and had joined the few remaining juvenile Sociable Lapwings that had hatched locally. The site at Arykty is now regarded as a regular staging site for migrating Sociable Lapwings and sizeable post-breeding flocks have been recorded there in July and August for the past six years. Maximum previous counts at Arykty were 273 birds in 2006, 98 in 2007, 261 in 2008, 400 in 2009 and 345 in 2010.

Until very recently the origin of these migrating birds was uncertain but last year it was confirmed that Sociable Lapwings from more eastern areas of the Steppe pass west through central Kazakhstan. This discovery was made when Raushan — a bird satellite-tagged on her nest near Kanterlau in Eastern Kazakhstan — was subsequently located close to the main study site on 14th September 2010. At that point she had moved some 600 km west of her breeding site to just northeast of Lake Tengiz near Tyngylykty.

Despite around 100 birds being marked with colour-rings in the Central Kazakhstan area this year, only two birds in the flock at Arykty were seen to be colour-ringed. One of these birds was positively identified and carried the colour sequence orange-blue-orange-orange, confirming it was ringed as a chick on 5th June at Korgalzhyn.

You can read more about the four Sociable Lapwings we are satellite tracking this autumn by going to the Amazing Journey website.