Ospreys in Kielder Forest, Northumberland, have had a record-breaking spring by hatching nine chicks, the most recorded since the species recolonised the county seven years ago.

The latest arrival on Kielder's Nest 2 has completed the new brood, topping the area's previous record fledging of eight in 2014. This includes four healthy chicks on Kielder's Nest 1A, one of only two public nests in Britain to have hatched so many eggs this year. There are now four chicks in Nest 1A, three in Nest 2 and two in Nest 3.

Joanna Dailey, Kielder Osprey expert volunteer, said: "It has been so exciting to watch the nests and see these eggs hatch, and the public visiting the webcams have been equally enthralled. To have four chicks on one nest is very rare — a one in a hundred occurrence — so that's particularly great to see.

"To have a record number of healthy chicks at Kielder is very rewarding for all involved. Ospreys recolonised Northumberland in 2009, following an absence from the region spanning more than 200 years, and we are seeing the species flourish here once again. The work the Forestry Commission Wildlife Rangers put into establishing these [nesting] platforms is now so rewarding for everyone involved." 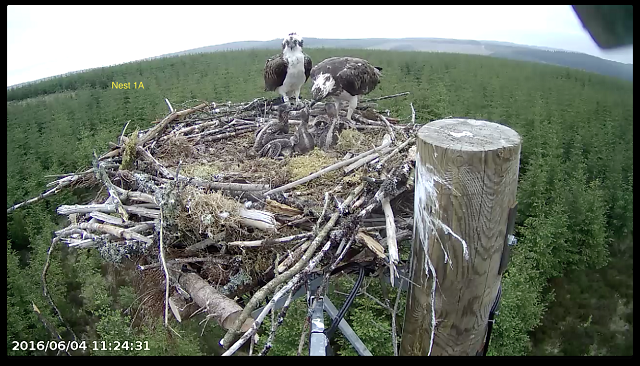 For many years Ospreys were seen passing through Kielder without stopping, always on the way north, probably to more long-standing nesting sites in Scotland or even Scandinavia. To encourage birds to linger and perhaps breed, the Forestry Commission installed a number of platforms around the forest after a failed attempt to nest by two young birds in 2008. This paid off, and the species returned to nest at Kielder in 2009.

Keep up to date with all the stories as they unfold through the Kielder Osprey blog at kielderospreys.wordpress.com, where there are also live video-feeds of the nests.