Read the May 2022 issue of Birdwatch 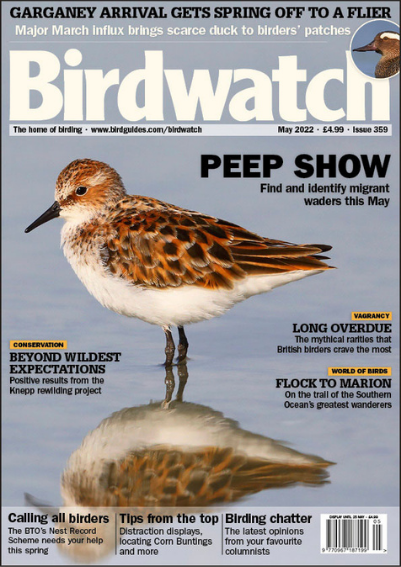 The digital edition of the May 2022 issue of Birdwatch can now be downloaded onto any device. The paper magazine is available in the shops from Thursday [28 April] – or you can order online.

Inside we continue to answer the question, which vagrant is most overdue for a reappearance in Britain? In the second part of his series on those extreme rarities that once occurred here but haven’t been seen for decades, Dominic Mitchell turns his attention to passerines.

Also in this month’s magazine, Matt Phelps provides an update on progress at the Knepp Estate rewilding project in Sussex. Well known for its White Stork reintroduction programme, the site is also one of the most rapidly improving biodiversity hot-spots in Britain and many declining bird species are thriving there.

May is the peak month for diversity and number of Arctic-bound shorebirds on your patch. In this month's ID guide, Josh Jones provides tips on how to find and recognise several species of Calidris sandpipers, from the familiar Dunlin to the highly prized Little Stint and Broad-billed Sandpiper.

Spring is a wonderful time for birding, with summer migrants arriving and others moving through on passage. But it's also a key time for a less visible yet integral element of birds' annual life cycles – nesting. Lee Barber and Mike Toms of the BTO explain how to hone your nest-finding skills and contribute valuable data to science.

Looking further afield, Sam Jones reports on a once-in-a-lifetime seabird cruise in the Southern Ocean – Flock to Marion – which offered a stunning array of albatrosses, petrels and plenty more besides.

Plus: more entertaining comment from columnists Lucy McRobert, Dominic Mitchell and David Campbell, the team at BirdGuides provides round-ups of March’s birding highlights from Britain, Ireland and the Western Palearctic, news, views and reviews, advice on building your birding skills and knowledge and our expert panel answers your questions.

May’s digital edition has lots of bonus content, including:

•    Video of spring Calidris waders;
•    Film of a singing Common Nightingale;
•    Footage of nesting White Storks;
•    Sound recordings of the songs and calls of Goldcrest and Firecrest;
•    Film of rarities and scarcities from Britain, Ireland and the wider Western Palearctic.