An investigation is taking place after 10 dead Ravens and a Carrion Crow were found on farmland near Beguildy. West Mercia Police are looking into the gruesome discovery – which also contained parts of a dead lamb – with the incident reported to the RSPB back in April 2018. Following toxicology tests, the presence of Diazinon – a veterinary product which is known to be used illegally to poison wildlife – was detected.

It's believed the lamb carcass was deliberately laced with Diazinon for this purpose and Jenny Shelton, RSPB Investigations, said: "Shropshire has a history of Diazinon abuse for the purpose of illegally targeting birds of prey and other protected species. We are grateful to Natural England and the police for investigating this matter, which poses a serious threat to wildlife and people.

"Ravens are incredibly intelligent creatures, able solve problems and form memories similar to our own. These once-scarce birds are gradually starting to recover after persistent persecution at the hands of humans, so it’s disturbing to hear of incidents like this still taking place.

"This area is also a stronghold for Red Kites – another bird making a comeback after disappearing entirely from England due to persecution. Poison baits pose a danger to these birds too. These investigations take time, as do the toxicology tests, and we realise there has been some delay in publicising this. But we feel this is an important story to tell." 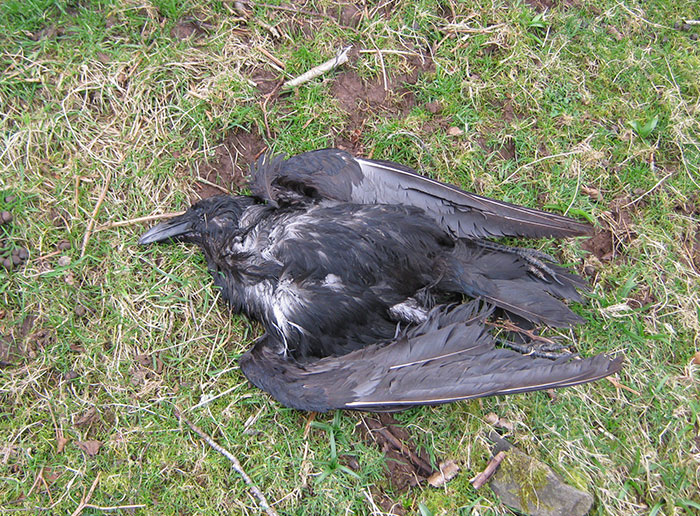 Shropshire has a history of illegal poisoning incidents (RSPB).

If you have any information relating to this incident, call West Mercia Police on 101. Furthermore, the RSPB is urging people to be vigilant and report dead birds of prey or Ravens this spring – a key time of year for illegal poisoning to take place. If you find a dead bird of prey or Raven beside a carcass that could be a poison bait, contact the government hotline on 0800 321600. Alternatively contact the police on 101 or RSPB investigations on 01767 680551.