Recent monitoring results of Chequered Skipper butterfly numbers at Lochaber's Allt Mhuic butterfly reserve on the north shore of Loch Arkaig show that numbers have increased for the second year running. The butterfly, which can only be found in the UK at a handful of Scottish sites in and around Lochaber and north Argyll, is staging a remarkable comeback after several years of decline. In 2009, counts on the reserve's butterfly transect (a standard way of monitoring butterfly populations) reached a low of only three. New management practices were introduced at the reserve, run by Forestry Commission Scotland, in 2010 and the recorded population has now increased fivefold. The reversal of fortunes is down to the Commission's using 15 Highland Cattle from its 100-strong Lochaber herd to graze specific areas during the year, benefiting the habitat and the food plants that Chequered Skippers prefer.

Independent eco-consultant Tony Millard, who has been monitoring the project since it began in 2002, said: "These latest results are a terrific achievement for the Commission's local team, who all show a real passion for what they are doing. Back in 2005 we recorded 38 Chequered Skipper along the transect and that declined year on year until 2009, when we only counted three. The Commission then brought the cattle in during the winter and we've seen Chequered Skipper numbers surge — up to eight in 2010 and now 15 this year. That is a brilliant result, especially as the poor summer has generally meant fewer butterflies across the UK. The cows have done an excellent job and must take much of the credit!" 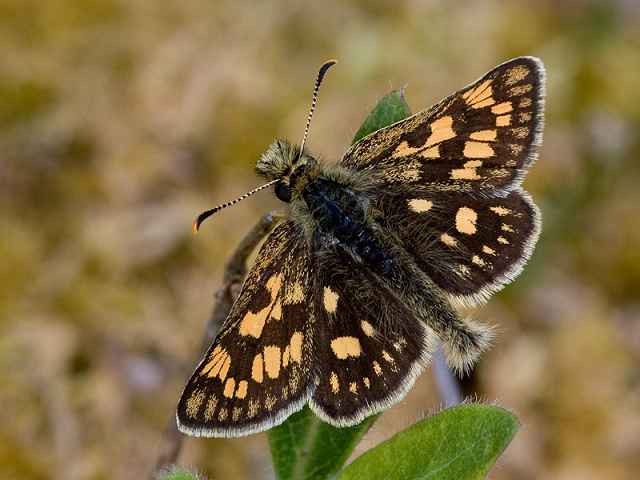 The Allt Mhuic reserve remains one of the primary sites for the development and refinement of grazing regimes for the conservation cattle herd based in Glen Garry. Approximately 100 cattle are, in small groups, grazing areas at the Sound of Mull (Savary), Poloch, Loch Shiel (Scamadale), Glen Loy, Cow Hill above Fort William and the original site at Loch Arkaig; and during 2011, Chequered Skippers were confirmed on all of these sites.

Kevin Peace, the local District Manager, said: "Our conservation cattle are a valuable resource, carrying out work where machines would find it impossible to function, and doing their thing 7 days a week, 52 weeks a year. Seeing Chequered Skipper numbers increase like this indicates that introducing cattle to Allt Mhuic and other sites was definitely the right thing to do. It's great news for the butterfly, but conservation grazing is also helping the Beautiful Demoiselle, Black Grouse, and plants such as the montane or Dwarf Birch and Juniper."

Tom Prescott from Butterfly Conservation Scotland confirmed: "It is great to be able to point to exemplary sites where there is practice in place to show how sites can be managed."