A rare beetle, thought to be extinct in County Antrim, has been seen in the Glenwherry area by the RSPB.

Anne Guichard, who was surveying the land as part of a project to protect the threatened Curlew, couldn't believe her eyes when she saw a Carabus clathratus beetle scurrying around beneath her feet. This species, which is about 30mm long, has a remarkable metallic sheen with conspicuous rows of deep pits on its upper body. They are powerful predators feeding mainly on earthworms and small invertebrates. 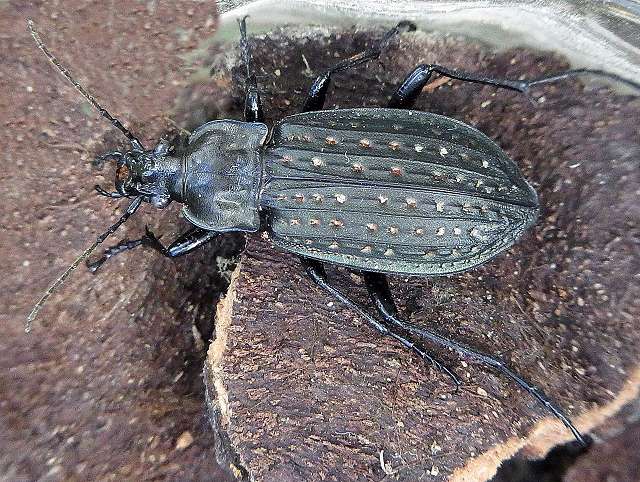 Carabus clathratus is in decline all over western Europe as its preferred habitat, natural bogs, swamps and mires, are increasingly being drained for agriculture or mined for peat. It was formerly widespread in Northern Ireland, but is now almost confined to bogs or water-logged lakeshores in County Fermanagh, making it a priority species in Northern Ireland.

Ms Guichard commented: "The last accepted record of this beetle in the county dates back to 1896, so I was shocked and delighted to see it when I was out surveying. Luckily, I managed to snap a photo on my phone and Roy Anderson, a local expert on invertebrate faunas and conservation, confirmed the ID for me."

She added: "In partnership with local landowners RSPB Northern Ireland has been working in the area for a number of years to help make homes for birds like Curlews and Lapwings. However, I believe all this good work in Glenwherry has also had benefits for other wildlife and flora in general — and my sighting of this rare beetle is a great example!"