North Yorkshire Police are investigating an incident in which men disturbed a pair of Marsh Harriers nesting on moorland near Ilkley, North Yorkshire.

The pair was discovered nesting on moorland forming part of Middleton and Denton moors, near the village of Denton, in May 2017. The site was monitored by RSPB investigators, who photographed the nest containing five eggs. The adult birds were observed at the nest.

A camera was set up to record activity at the nest site. Video images recorded by the camera show that on 17 May at least two individuals, who appeared to be men, wearing dull, brownish-green coloured jackets, traditional country caps, and carrying what looked like shotguns and a brown game bag approached the nest site on six occasions between 12.40 pm and 9.30 pm. The sound of several shots fired in the vicinity of the nest were recorded, as was the noise of an engine, believed to be a quad bike. One of the men stood over the nest, bent down, and appeared to pick up something from the nest before walking away.

The following day, 18 May, a further visit by a man, similarly attired, along with a green rucksack, was recorded at around 9.40 am. This individual stood over the nest, bent down, and appeared to remove something from the nest. An RSPB investigator checked the site on 19 May and discovered the nest had no eggs in it, with no sign of any debris from damaged eggs.

The people shown on the video at the nest site have not been identified. A number of men have been spoken to by police as part of the investigation.

Before and after: the Marsh Harrier nest, with five eggs, photographed on 9 May 2017 (left), and then photographed again, lacking eggs or any clear signs of damage, on 19 May (right). 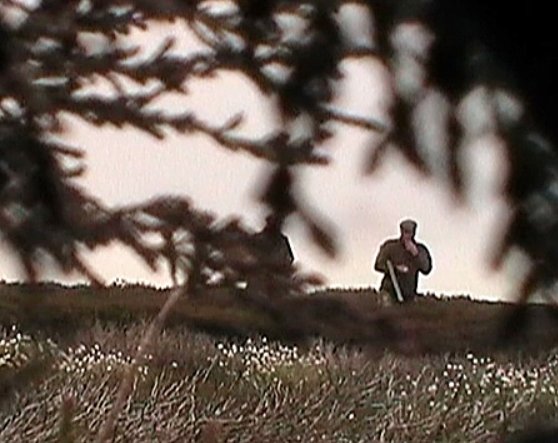 The Wildlife and Countryside Act 1981 (WCA) makes it an offence to take, damage, or destroy the nest of any wild bird. Marsh Harrier is a scarce species, listed on Schedule 1 of the WCA, and is afforded additional protection. It is an offence to intentionally or recklessly disturb Schedule 1 birds while they are at, or near, a nest with eggs or young. Normally breeding in marshes and reed beds, it is unusual to find the species breeding in heather on a moor.

PC Bill Hickson, who is investigating the incident, said: “The video evidence provided by the RSPB shows illegal activity around a Marsh Harrier nest, and the activity shown speaks for itself. The pictures on the video are, unfortunately, too small to produce an image from which any of the individuals shown could be identified.”

Anyone who has any information about the incident or can help identify who was responsible is asked to contact North Yorkshire Police. Telephone 101, choose option 2 and ask for PC 820 Bill Hickson or email bill.hickson@northyorkshire.pnn.police.uk. The RSPB is offering a reward of £1,000 for information leading to conviction of those responsible.