A report published yesterday (7 May) finds that pine martens are starting to re-colonise the south of Scotland. The Scottish Natural Heritage (SNH) report, in collaboration with The Vincent Wildlife Trust (VWT), confirmed the presence of Pine Martens in three new separate areas of southern Scotland. The species was once found throughout the UK, but suffered one of the most dramatic declines of any UK mammal. Woodland clearance, trapping for fur and predator control by gamekeepers led to a widespread decline in the 19th century.

In the last half of the 20th century, however, marten populations have recovered in Scotland and are now established in most areas north of the Central Belt, including the northern fringes of Glasgow and some other parts of the Central Belt. The species is still rare in the UK and absent from most of England and Wales. In 1988, the species was given full legal protection. The three new sites are immediately south and west of Glasgow; the Upper Tweed Valley; and in Annandale and Eskdalemuir in eastern Dumfries and Galloway. A small number of pine martens were re-introduced to the Galloway Forest in the early 1980s, but the new arrivals are not thought to have spread from this group — which has remained in isolation. The new groups have most likely originated from a combination of natural spread and deliberate releases. The information on martens in new areas comes from a recent survey, in which droppings were collected from woodlands and subjected to DNA analysis to confirm their origin. Records were also collected from foresters, naturalists and local record centres. 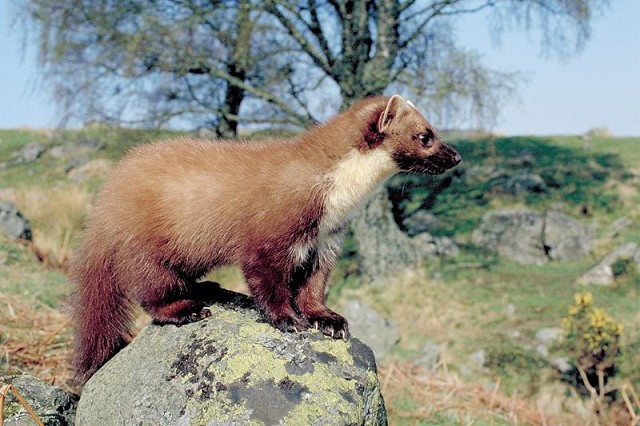 Lizzie Croose, VWT's survey coordinator, said: "The Pine Marten is the first mammalian predator which almost became extinct in the 19th century to make a substantial recovery in Scotland. Pine martens have been absent from most of southern Scotland for almost 200 years so their return is significant."

Rob Raynor, SNH's mammal advisory officer, added: "Considering how common Pine Martens once were and how severely their numbers dropped, it's quite likely that they will re-colonise most suitable habitats in southern Scotland in time. At present, recolonisation of the new areas is still at an early stage, but if breeding populations do establish successfully, pine martens will probably expand throughout southern Scotland and south into northern England."

Pine Martens are cat-sized members of the weasel family with long bodies, covered with dark brown fur with a large creamy white throat patch. They generally prefer to live in woodlands but can also live in crags and on rocky hillsides. They make breeding dens among rocks, in hollow trees or in birds' or squirrels' nests. Their exceptional climbing ability allows it to establish dens high in the trees and escape from predators such as red foxes. The pine marten is an opportunistic predator and its diet includes small mammals, such as field vole, invertebrates, fruit, small birds and carrion.

To coincide with the publication of this report, and recognising how Pine Martens do sometimes occupy the roof spaces of houses, a new leaflet has just been produced jointly by SNH and VWT called "Living with Pine Martens — a guide to the Pine Marten in Scotland" which provides practical guidance on what householders can legally do in these situations. Copies are available online here.