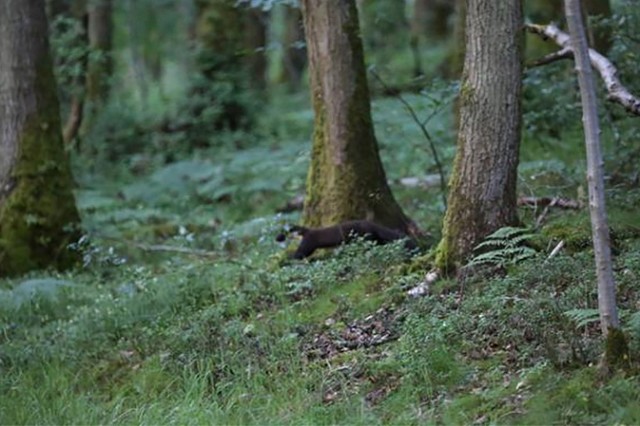 This photo depicts what has been touted as the first confirmed sighting of a Pine Marten in England for over 100 years.

For the past five years, Stuart has been running the Shropshire Pine Marten project, following up sightings, mostly from the Shropshire Hills area, where there is plenty of forest cover and low human population density. So far, all the reports have been either unverifiable or cases of mistaken identification. But Stuart remained convinced that one day, conclusive evidence would emerge of the presence of Pine Marten in the area.

There have been rumours of Pine Martens in England on and off for years. Most of these, on close enquiry, have proved to be domestic cats, mink and even black squirrels. A sighting in Staffordshire in 2007 was almost certainly an escapee from a nearby wildlife sanctuary while, earlier this year, camera trap footage from North Cornwall appeared to depict the species.

Mr Edmunds commented: "This is incredibly exciting. Pine Martens were thought to be extinct in England and there is now a possibility that they may have been living here right under our noses for a long time."

There is a thriving population Pine Marten in Scotland, estimated to be in excess of 4,000 individuals. They also occur in small numbers in Snowdonia and mid-Wales. The species can be very mobile, easily travelling 20 km in a day. They are also highly territorial, which means they are naturally quite dispersive. It seems likely the Shropshire individual could have come from Wales.

Pine Marten is a house cat-sized member of the stoat and weasel family which is generally only active in the twilight hours and at night, making it very difficult to see.

Mr Edmunds is keen to hear of other possible Pine Marten sightings, send info to him directly via email or via Twitter @PinemartensUK.

An exciting update from Shropshire confirms the presence of at least one Pine Marten through camera trap video footage. For more information and to view video footage, see this Facebook post.