Pine Marten confirmed on Anglesey for first time in 30 years

The first confirmed sighting of a Pine Marten on Anglesey for 30 years has been made by Red Squirrel researchers.

The three photos were part of a set of 15,000 captured by one of the cameras set on the island to improve knowledge of Red Squirrel habitats. Researcher Dr Graeme Shannon said he was "thrilled to suddenly come across three clear images of a curious Pine Marten looking back at the camera". 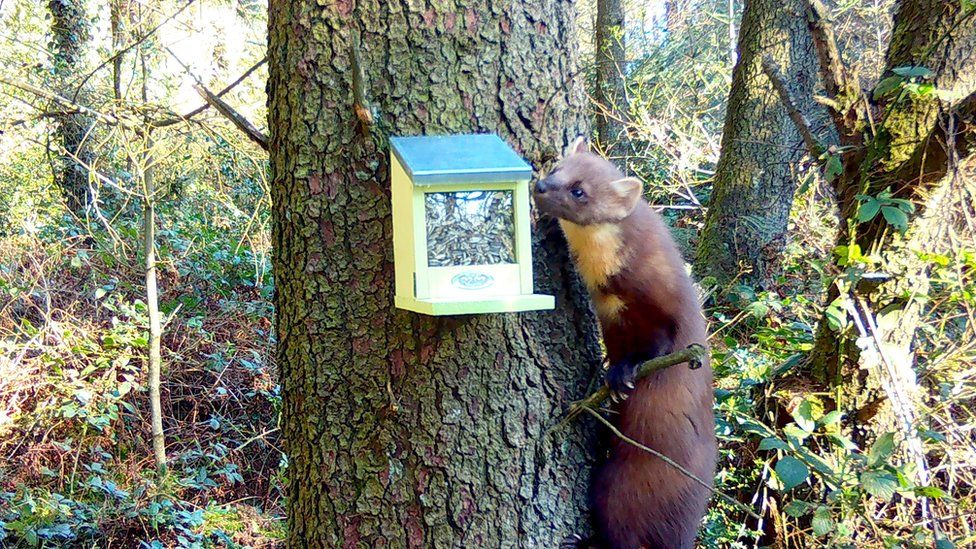 The photo of the marten was part of a sequence of 15,000 photos taken by a camera on Anglesey (Bangor University).

The team of Bangor University researchers set up the network of cameras across different types of woodland. The project, funded by Natural Resources Wales, aims to see how forest management may affect their numbers.

"After working my way through a few hundred Great Tit photos, seemingly the same individual hopping back and forth, I was thrilled to suddenly come across three clear images of a curious Pine Marten looking back at the camera," said Dr Shannon.

He added that until recently the species was extremely rare in Wales, so it was "an unexpected but very exciting discovery".

Pine Martens were released near Bangor between 2018 and 2020 as part of the Gwynedd Pine Marten Project. They have been released in other parts of Wales since 2015.

Scientists have very occasional photographic evidence of individuals in Faenol woodland near the Britannia railway bridge. Researchers said there have also been anecdotal reports of animals close to Holyhead, fuelling suspicion that perhaps an animal may have stowed away on an incoming ferry from Ireland, where the species is abundant.

In addition, 51 Pine Martens were released in mid Wales from 2015-2017 to help boost numbers and some of these animals have been sighted more than 50 km from the release site.

Dr Simon Valle, conservation science lecturer, said: "It's encouraging to see that even on an island with such low tree cover, local forests still hold the potential for witnessing the return of a charismatic species such as the Pine Marten. Maybe our forests are, or can be, much wilder than we often think."