A police investigation has been launched after a Peregrine Falcon was found shot near Selby Abbey in North Yorkshire.

On 7 May an eight-year-old female bird was discovered in the grounds of the Abbey with injuries that meant it was unable to fly. The peregrine was rescued and x-rayed by a local falconry specialist vet, Mark Naguib, who found a number of shotgun pellets throughout the bird's body. 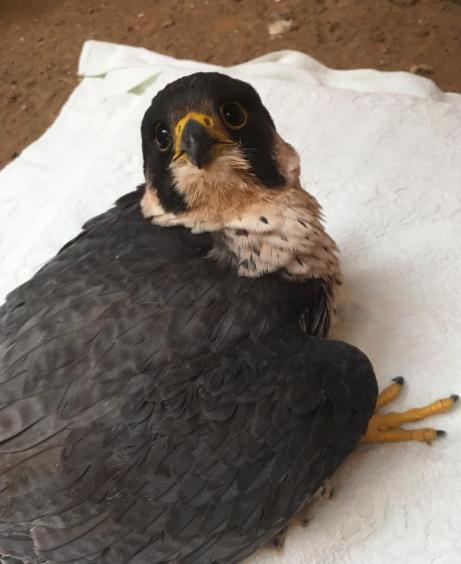 The Peregrine Falcon that was shot in North Yorkshire (RSPB).

The bird had been ringed as a chick near Newark eight years ago. Now, the falcon is in the expert care of local wildlife rehabilitator, Jean Thorpe, who will give her the best possible chance of making a recovery.

North Yorkshire Police Constable Sarah Ward said: "Peregrine Falcons are a protected schedule one species and it is shocking that anyone would target one in this cruel and callous way. Our county should be a haven for birds of prey and this type of cruelty will not be tolerated.

"If anyone has information about this worrying incident please get in touch and report to us. You can either call 101 or if you wish to remain anonymous please call Crimestoppers on 0800 555 111."

RSPB Investigations Officer, Jack Ashton-Booth, added: "We are appalled at this deliberate and illegal attack on a protected Peregrine Falcon. The bird was riddled with shots, including one piece lodged in its head. Incredibly, it is still alive but it's touch and go.

"Peregrines are incredibly good at adapting and are increasingly living alongside us in our towns and cities, and are a joy to see nesting on tall buildings like cathedrals. Nature is in trouble, and we must embrace it or risk losing it."