Durham Constabulary and the RSPB are appealing for information about a Peregrine that was found illegally shot in the county.

The dead bird was found on the south-east edge of Stang Forest, near the North Yorkshire border, on 23 August 2015 by a member of the public, who reported the discovery to Durham Constabulary and the RSPB.

The Peregrine was sent for a full post mortem examination, which confirmed that the bird died as a consequence of being shot. The bird had suffered severe blood loss and it most likely died in close proximity to where it had sustained the gunshot wounds.

This incident is the latest in a series of crimes against birds of prey in County Durham this year. In March, two Short-eared Owls were found shot near Selset Reservoir and in June, a Peregrine was discovered shot at Castle Lake, Bishop Middleham. 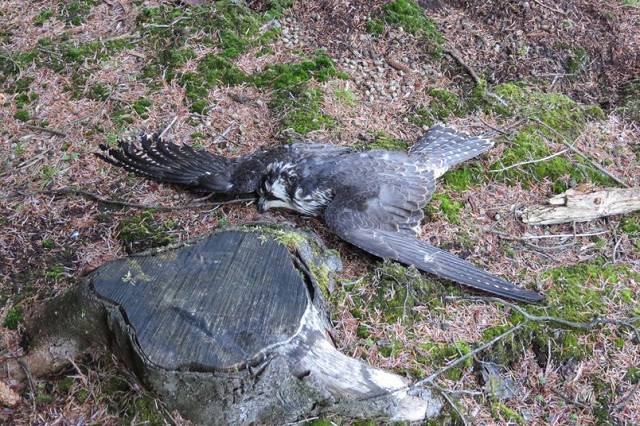 The Peregrine was found shot on the south-east edge of Stang Forest (Photo: RSPB)

PCSO Elizabeth Finn of Durham Constabulary said: "The shooting of this rare and majestic bird is against the law, and it beggars belief that in 2015 a bird of this status has been shot and killed. I urge anyone with information about this tragic incident to contact the police or Crimestoppers."

RSPB Investigations Officer, Howard Jones, commented: "This case once again provides a window into the reasons behind the Peregrine Falcon's struggle to breed in much of the English uplands. Illegal persecution continues to limit the breeding success of this species in the uplands, which is in stark contrast to the bird's successful recovery in the lowlands."

Peregrine is the world's fastest animal, capable of speeds of up to 200 mph when descending in flight. Wild Peregrines have been legally protected since 1954 and anyone found guilty of an offence faces up to a maximum of six months in prison, as well as an unlimited fine.

Anyone with information about who may be responsible should contact the police immediately on 101 or call Crimestoppers on 0800 555 111.