The last fragments of forest supporting Gurney's Pitta are being cleared for oil palm plantations. Following its relatively recent loss from Thailand, the species now occupies a small range of flat, low-lying forests in Myanmar. Unfortunately, these same forests are being cleared to make way for oil palm and betel nut plantations, leaving the species in an exceptionally precarious state. 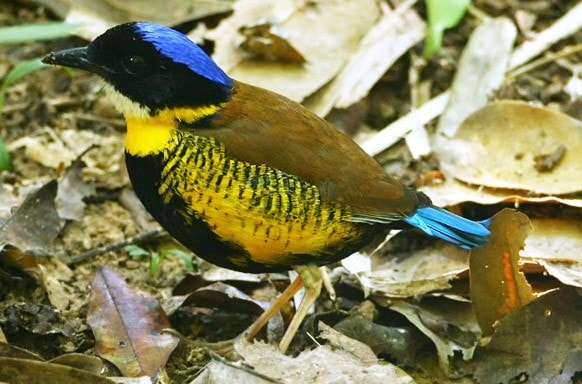 Gurney's Pitta has declined by a remarkable 70 per cent during the last 13 years, with this staggering drop largely due to habitat loss. The latest threats are not the first time the species has flirted with extinction, however. Widespread in Thailand before 1915, it was feared extirpated there after there were no confirmed sightings between 1952 and 1985. However, it was rediscovered in 1986 and populations were then unearthed in five separate locations.

However, by 1997 the species had again dwindled, occurring in only one of its previous five Thai habitats. At that time, the global population was estimated at a mere nine pairs and the pitta was believed to be one of the rarest species on earth.

Thankfully, a search for Gurney's Pitta in Myanmar in 2003 successfully found the species at several sites and estimated the population at between 5,000 and 8,500 pairs. Despite this positive development, though, since then the decline has been rapid.

While it’s currently listed as Endangered, civil unrest within the final stronghold of its range could increase rates of habitat loss and push the species to Critically Endangered.