Owls gunned down in Peak District

In two separate incidents in the Peak District, single Short-eared and Tawny Owls have died as a result of being shot.

The birds were discovered on 11 September and 1 October respectively, with both suffering injuries consistent with shooting. The RSPB has passed on the information to the police and subsequently an investigation has been launched. 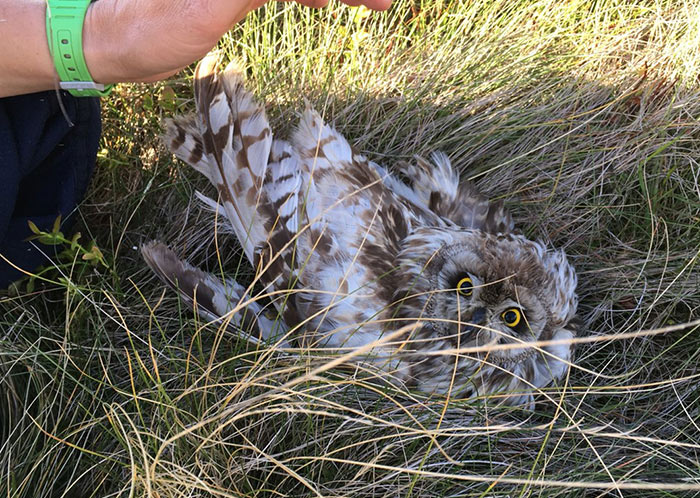 The Short-eared Owl was found upon discovery, but had to be put down as a result of its injuries (RSPB).

On 11 September a member of the public witnessed a Short-eared Owl flying overhead, followed by gunshots, before finding the severely injured bird at the same spot the following morning. It was taken to a vet but the extent of its injuries – which included a shattered wing – meant the owl had to be put down. Then, on 1 October, the corpse of a Tawny Owl was found close to the site of the Short-eared Owl.

Post-mortem examinations showed that both birds suffered injuries consistent with shooting, thus making it highly likely that they were illegally killed. The member of the public who found the Short-eared Owl said: "I had just got back to my car when I suddenly saw a Short-eared Owl fly over my head – it's always fantastic to see one of these gorgeous birds. This, however, was followed by the sound of a gunshots, coming from the direction of a dark-coloured pick-up. I really hoped this wasn't aimed at the owl I'd just seen.

"The next morning I returned to the same spot and, there on the ground, was a Short-eared Owl, still alive but clearly wounded. I was so upset but also furious to think that someone had done this on purpose."

Jenny Shelton, RSPB Investigations Liaison Officer, added: "It's very disturbing that owls are being illegally shot in our oldest National Park. Short-eared Owls are beautiful birds and should be a celebrated, not persecuted. They are part of a healthy ecosystem and part of our national heritage. I would urge everyone who uses the countryside to be vigilant of bird of prey persecution, and to report anything suspicious to the police immediately."

Both of these shocking incidents are the latest additions to a long list of illegal raptor persecution cases that have occurred in the northern ‘Dark Peak' of the Peak District in recent times. Craig Best, Countryside Manager for the National Trust in West Yorkshire, explained his disappointment: "It's really frustrating to hear that this has happened on our land at Marsden Moor.

"It's been a difficult year for moorland across the North of England, not least the considerable fire damage in the summer which destroyed precious habitats for species like the Short-eared Owl. These mindless acts are cruel and unnecessary. Our volunteers and staff are keeping a close watch out and we'd urge anyone with information about this incident to report it to the police."