A man, who has not been named publicly, has received a police caution after admitting responsibility for setting three pole traps on a grouse shooting estate inside the Yorkshire Dales National Park.

Pole traps were outlawed in 1904 and consist of a metal spring trap placed on an exposed post in order to target birds of prey. When triggered they snap shut with considerable force, crushing the legs of the bird. Trapped birds remain present until they succumb to their injuries or are killed by the trap operator.

On Friday 6 May, a member of the public reported finding three spring traps illegally set in the open on isolated posts about 100 metres apart. These were at a remote location along the north side of Widdale Fell, on the Mossdale Estate near Hawes, North Yorkshire. A Hen Harrier had been seen hunting on the fell a short distance away that morning. The finder made two of the traps safe and reported the matter to the RSPB.

RSPB investigators attended that same day and installed covert cameras on two of the traps. The safety catch was put in place on the remaining set trap to prevent it catching anything.

Returning on the evening of Monday 9 May, it was discovered that all three pole traps had been reset. The covert footage showed an individual taking the safety catch off one trap and resetting another earlier that day.

Before and after: the individual re-sets a pole trap (Photos: RSPB)

RSPB investigators made the traps safe and reported the matter to the police. Wildlife Crime Officers from North Yorkshire Police attended with RSPB the following day and recovered all three unset traps. Two of the traps had small feathers adhering to the jaws, suggesting they may previously have caught birds. 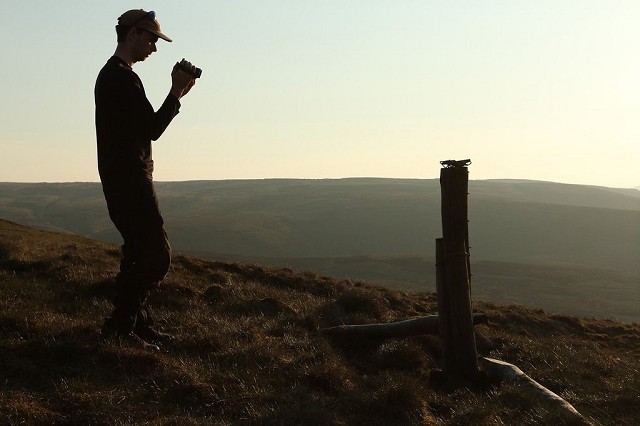 An individual was later interviewed by the police and accepted responsibility for setting all three traps. He received an adult caution. Bob Elliot, Head of RSPB Investigations, said: "These are dreadful barbaric devices and have no place in the 21st century. North Yorkshire has long held the unenviable reputation of the worst county in England for raptor persecution.

"The sighting of a Hen Harrier in the immediate area is of particular concern. This species is nearly extinct as a breeding species in England and it last bred successfully in North Yorkshire in 2007 despite huge areas of suitable habitat. Earlier this year, Defra launched its Hen Harrier Action Plan, which has been supported by shooting organisations. Yet again, we have seen that there appears to be little sign that birds of prey will be tolerated in our uplands.

"These crimes are extremely difficult to investigate. While we are grateful for the excellent police response in attending this incident, we simply do not understand the decision to issue a caution for such a serious case. We will be writing to the police to ask for an explanation of this decision.

"The UK government has set raptor persecution as one of the national wildlife crime priorities. To create a meaningful deterrent we believe there needs to be a zero tolerance approach to serious crimes of this nature."