Osprey breeds at Belvoir Castle for first time in 200 years

Staff at Belvoir Castle are celebrating after the first Osprey chicks were born at the site in more than 200 years.

After birds were spotted on the historic estate, platforms were put down to encourage nesting. Beth Dunstan, who managed the eight-year breeding project at Belvoir, said it was "a real triumph for persistence, teamwork and collaboration". 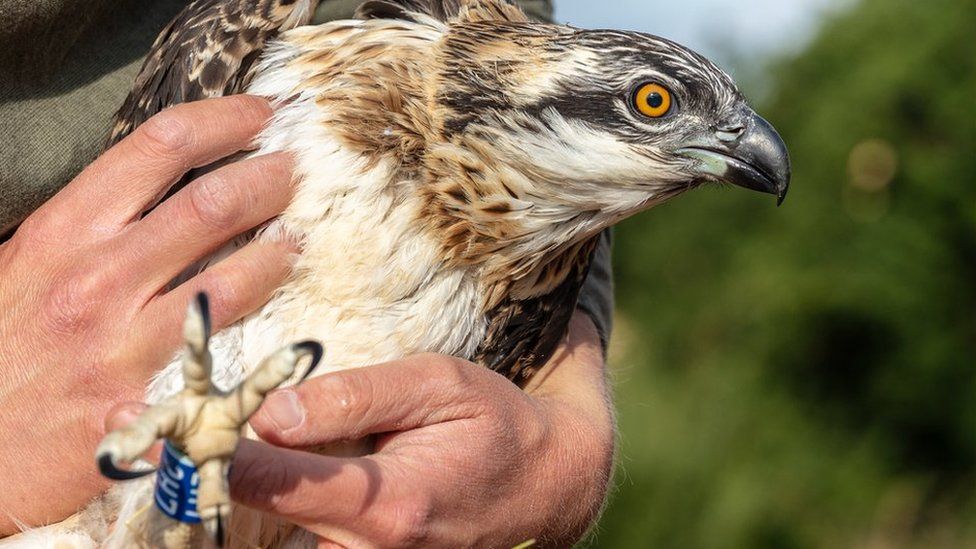 One of the young Ospreys being ringed (Redbrick Communications).

"We are delighted to have attracted ospreys naturally back to Belvoir after all this time," she said. "They are a beautiful and iconic bird and are right at home in this fantastic landscape."

The male was identified by his ring as '4K', a bird that hatched at Rutland Water in 2013, with the tag allowing people to track his migration from Guinea back to Belvoir each spring. He mated with an unringed female believed to have been born in Scotland, and both chicks have successfully fledged over the summer.

The Duchess of Rutland said she was "delighted" to see a bird born from another local conservation project return to Leicestershire to breed.

"It seems amazing to think that the Osprey probably last bred at Belvoir back at the time when Capability Brown was surveying the castle grounds for the 4th Duke and Duchess of Rutland in the late 18th Century," she said.

"With Brown's originally unfinished plans recently completed and established at Belvoir, and so much wildlife conservation work undertaken here, it seems a fitting stamp of approval to have the Osprey back."