A Norfolk gamekeeper was yesterday found guilty after the discovery of at least eleven illegally poisoned birds on a game shooting estate in Norfolk in 2013.

Allen Lambert (65) was previously employed as a gamekeeper on north Norfolk's Stody Estate, situated to the south of the town of Holt. On Wednesday he appeared at Norwich Magistrates' Court and was found guilty of two charges relating to the killing of eleven birds of prey (ten Common Buzzards and a single Sparrowhawk) as well as possession of pesticides and other items capable of being used to prepare poison baits. Mr Lambert had earlier pleaded guilty to five other charges, including three offences of illegal storage and use of pesticides as well as the unlawful possession of nine dead Buzzards. The matter has been adjourned for sentencing at Norwich Magistrates Court on 6 November 2014.

On 4 April 2013, RSPB Investigations followed up a report of dead birds of prey in a wood on the Stody Estate in Norfolk. The remains of five Buzzards, one Sparrowhawk and a Tawny Owl were found, having apparently been dumped in the wood. The birds were recovered and subsequent analysis confirmed at least one Buzzard and the Sparrowhawk had been poisoned by the pesticide mevinphos. This was a former agricultural pesticide but banned from use in 1993. 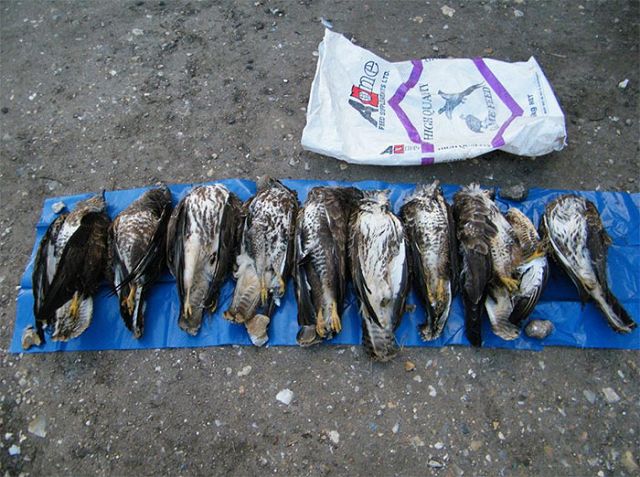 A shot of the Common Buzzards poisoned by Mr Lambert (Photo: RSPB).

Later that day, officers from Norfolk Constabulary, supported by Natural England and RSPB visited Mr Lambert's home address. A search of his vehicle and unlocked storeroom found two containers of the pesticide mevinphos and a further container with the pesticide aldicarb, a substance also banned from use in 2007. Both of these highly toxic products have a long history of abuse for wildlife poisoning.

The laying of poisoned baits in the open countryside to kill bird and animals has been illegal for over 100 years. With one of the pesticide containers was a syringe and a number of needles. These items are often referred to as a 'poisoner's kit' and used to inject poison into eggs or carrion. However, the most shocking find was a game bird feed bag at Mr Lambert's home, which contained the bodies of nine Buzzards. Analysis by a government laboratory confirmed all nine had also been poisoned by mevinphos. It is suspected these had been poisoned on the estate and collected by Mr Lambert for disposal. 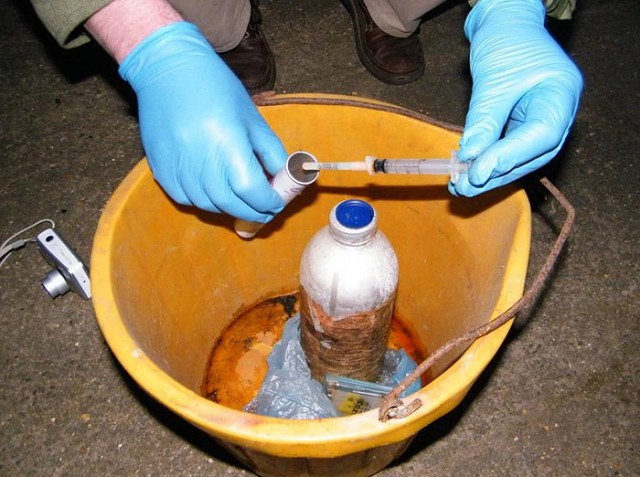 Bob Elliot, Head of RSPB Investigations, commented: "This is the worst case of bird of prey poisoning we are aware of in England, and one of the worst ever recorded in the UK. Finding the carcases of nine poisoned buzzards in a bag at Lambert's home was truly dreadful.

"Unfortunately, this is part of a wider national problem. In 2013 we recorded 76 individual birds and other animals illegally poisoned, including 30 buzzards and 20 red kites. We are now calling on the UK government to show their commitment to the protection of birds of prey by introducing stronger legislation, such as increasing controls on people who possess pesticides used to poison wildlife such as mevinphos and aldicarb. This could be vital in the fight against illegal persecution."

Alan Roberts Investigative Support Officer for the National Wildlife Crime Unit, added: "This case has been significant because of the number of birds of prey found poisoned which, together with the lax attitude to firearms security, has exposed an ingrained blasé attitude to lethal chemicals and weapons. There is a lot of work going on amongst all the relevant agencies from the law enforcers to gamekeeping bodies and the RSPB to stamp this sort of behaviour out. We will continue to seek out and prosecute anyone who follows Allen Lambert's style of predator control."

Dr Andy Clements, Director of the BTO added: "BTO data provided expert evidence to this case. Up to date information on the distribution and abundance of Buzzards in north Norfolk, from the Breeding Bird Survey, Bird Atlas 2007-11 and BirdTrack helped to support the prosecution's case by providing proof that populations of the bird in the area are consistent with the number of birds that Lambert was suspected to have poisoned."