A report published on Wednesday (22 July) has revealed how plant and animal life across England will be affected by climate change. Wasps, ants, bees and species with a southerly distribution such as Dartford Warbler are likely to benefit from increasing temperatures as their potential ranges increase. However, upland breeding birds such as Eurasian Curlew and damp-loving mosses and liverworts will be at risk.

The report, which assesses the risks and opportunities for species in England as a result of climate change, has been published by Natural England in partnership with the British Trust for Ornithology (BTO), University of York, the Centre for Ecology and Hydrology and the RSPB.

The study looked at more than 3,000 plants and animals that occur in England, describing potential distribution changes that may occur as temperatures rise. With an increase of 2°C in average global temperatures by 2080, researchers found that 27 per cent of species were at a high to medium risk of losing a substantial proportion of their current ranges. While 54 per cent could expand their distributions, this would not be possible in many cases due to limited mobility or a lack of suitable habitats. 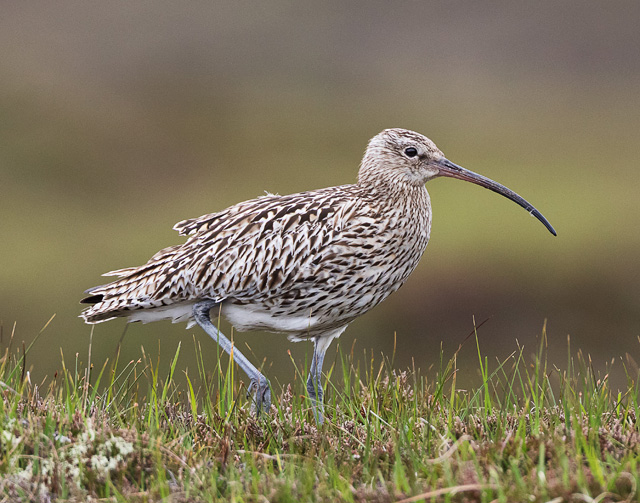 England's upland breeding species, such as Eurasian Curlew, will be at risk (Photo: Antony Ward)

A more detailed study of 400 species found that 35 per cent would be at risk, with 42 per cent likely to benefit, while an analysis of 155 species currently listed as of conservation concern identified 38 per cent as at risk and 39 per cent as potentially benefitting.

The results reflect the fact that there are more southerly, heat-loving species in England that are likely to flourish as temperatures rise. Northern and upland species that prefer a cooler climate, such as European Golden Plover and Twite, are likely to suffer. The current boom in Avocet and Little Egret numbers is set to continue apace.

Dr Richard Bradbury, Head of Environmental Research at the RSPB Centre for Conservation Science said: "This report builds on a substantial weight of evidence that climate change is already affecting UK species, and will have further, large impacts in the future. The nature we know and love will change, with some warmth-loving species becoming more familiar, while we risk saying goodbye to some of England's colder-adapted species. It is imperative that we minimise the risks, by reducing carbon emissions, while redoubling our efforts to reduce the threats to vulnerable species and provide safe homes for nature, both in nature reserves and other protected areas, and in the wider landscapes in which wildlife should thrive."