An innovative new nesting tower for the River Tyne's iconic Kittiwake colony is set to be built in Gateshead.

The result of three years of research by a Tyneside renewable energy consultancy, the 15-m tower has been given planning permission by Gateshead Council on land at South Shore Road. It is planned to install the tower early next year, using the Tyne colony as a test bed for how the structure performs.

The new structure, which can accommodate up to 200 Kittiwake nests, will be adjacent to the existing nesting tower at Saltmeadows, which currently supports the furthest inland Kittiwake colony in the world. The new tower will incorporate features such as a central cabin which will enable ornithologists to observe, monitor and if necessary provide supplementary feeding to the breeding birds. 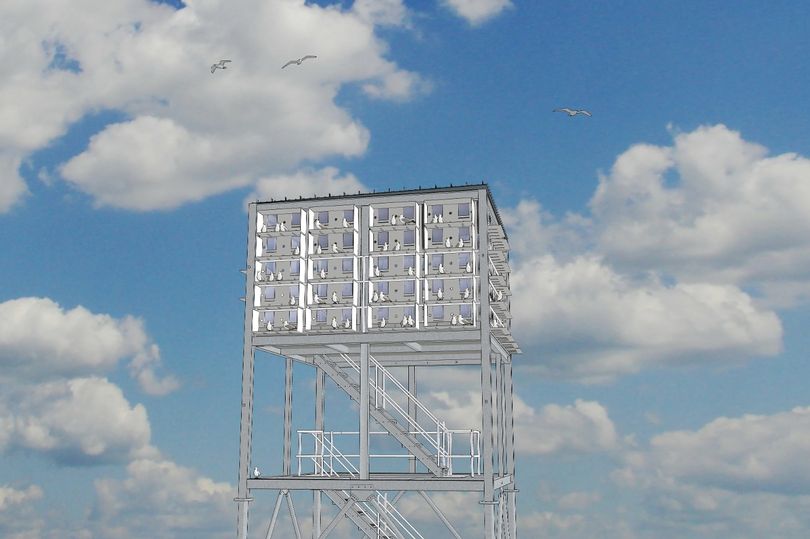 Plans for the new 'kittiwakery' in Gateshead (Shoney Wind).

It is hoped that the tower will help to ease some of the conflict between the internationally important Tyne colony and birds nesting on some buildings such as the Guildhall in Newcastle. The Kittiwakes have had to contend with netting, spikes and Avishock systems which have been deployed on some buildings to deter nesting. This has led to deaths of birds caught in netting.

The 'kittiwakery' tower has been designed by Shoney Wind Ltd (SWL), a consultancy run by director Nathalie Stevenson, based in South Shields, working with and Francis and Lewis International (FLI), a market leader in masts and towers. Gateshead Council ecologist Peter Shield and North Shields Kittiwake expert Dan Turner have supplied data on the Tyne colony built up over many years.

Compared with other artificial nesting designs, the new tower has a number of added benefits including feeding holes to support breeding birds, accessibility to ornithologists and security from predators. The tower has been commissioned by renewable energy company RWE.

Ms Stevenson said: "My personal ambition is to have more towers on the Tyne, and SWL are looking for support in delivering this ambition. The kittiwakery designs set out to improve on the existing Saltmeadows tower. The theory is that Tyneside urban Kittiwakes will find the new tower appealing. Kittiwakes are faithful to good quality nest sites year on year. It is hoped that the new kittiwakery tower will appeal and will be colonised.

"SWL set out to design-in safe access for ornithologists and design-out potential hazards such as rope access work and use of cherry-pickers. This offers an unprecedented opportunity to undertake scientific studies, which aren’t easily possible at the Saltmeadows tower due to access challenges."