The first of a hand-reared group of critically endangered birds has been spotted migrating back towards where it was hatched by conservationists.

The tiny Spoon-billed Sandpiper — the only bird in the world to hatch with a spoon-shaped beak — could be down to fewer than a hundred breeding pairs. Aviculturists led by WWT's Roland Digby reared nine chicks by hand in 2012 at the breeding ground in northern Russia, to ensure they survived through the crucial early days. The birds migrated 5,000 miles away to south Asia and there's been a two-year wait to see whether they would return north to breed. 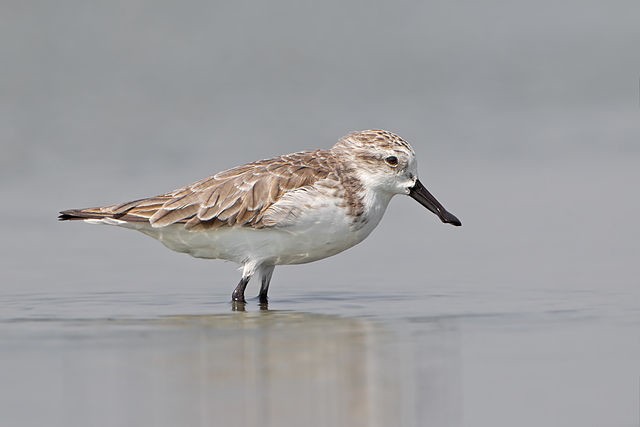 Now one of the group has been spotted and photographed on its way back to Russia by Chung-Yu Chiang and Chin-Shi Hsu at Kinmen Island, Taiwan, off the east China coast. At two years old, it's now ready to breed and could become the first hand-reared Spoon-billed Sandpiper to produce offspring and add to the species' fragile population.

"Two years ago I reared and released nine Spoon-billed Sandpiper fledglings on the Russian tundra. Theoretically all could return to breed for the first time this summer, but the odds are severely stacked against them. Illegal bird-trapping and the destruction of wetlands mean that very few birds survive to maturity."

"It tells us that hand-rearing works and these birds behave and migrate normally. What's more, reports of individual birds like this one, who we know, give us an indication of the proportion of young birds that are reaching breeding age."

The leg ring shows this bird hatched on 14th July 2012 from an egg of a clutch collected for artificial incubation on 22nd June. After fledging it was released on 10th August and was last seen on the Russian breeding grounds on 17th August 2012.

Pavel Tomkovich of Birds Russia, who marked the bird, said:

"During the coming summer we'll look for this bird back on the breeding grounds and hope to see it in the area where it was raised and released."

"All that remains of the Spoon-billed Sandpiper population is thought to be fewer than 100 breeding pairs. So seeing this one individual, who we know is just reaching maturity and returning to breed for the first time, is hugely significant."

"This is a huge reward for the team that toiled to rear these birds on their arctic breeding grounds. The pictures of Lime 8 show that it is growing its breeding-plumage feathers right on schedule, showing that headstarted young that have successfully integrated into the wild population."

Roland Digby and Pavel Tomkovich are due to return to the Spoon-billed Sandpiper's Russian breeding grounds this month for a further season of field surveys and hand-rearing.

The project is part of a multi-pronged international attempt to save the Spoon-billed Sandpiper. In case the birds in the wild suffer further losses, the only reserve flock in the world is being reared in a biosecure facility at WWT Slimbridge Wetland Centre. In the near future, eggs from the Slimbridge flock could be flown to Russia to be hatched and released as an insurance against the species falling into extinction quicker than it can be saved in the wild.