Two Peregrine chicks left orphaned after their parents were killed in illegal traps have been placed with foster parents in the wild. RSPB officers managed to put the chicks in two separate nests in an area away from the Birmingham area, where traps have been found near two nests in recent weeks. Both birds had been cared for by bird of prey charity Raptor Rescue since they were found starving on their nest in a quarry near Cannock on the 22nd May. 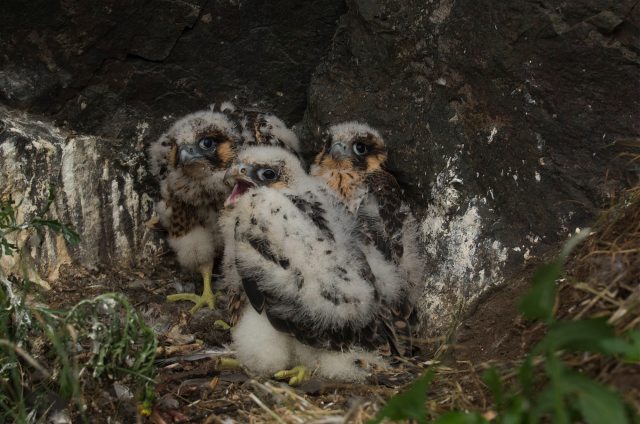 They were discovered next to their father who was caught by the leg in a metal spring trap, set illegally on the ledge where they were nesting. Despite efforts to save him, the father was too badly injured and had to be put down. The mother had also disappeared and was presumed dead.

The RSPB has offered a £1,000 reward for information leading the conviction of those responsible for setting the traps at the Cannock site and at another quarry near Dudley in the West Midlands. Peregrine Falcons often rear three to four chicks, and the sites selected only had two chicks present, making them ideal new homes. At both sites, the two resident chicks immediately accepted their ‘new’ sibling. 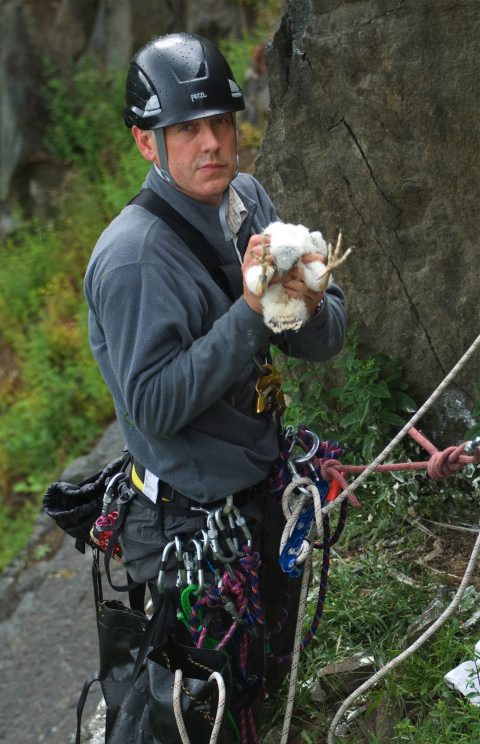 RSPB Investigations Officer James Leonard, who helped return the chicks said: “It was great to see the two chicks so readily accepted at both nest sites. This technique has been successfully used before and, as it appears that adult Peregrines cannot count, we are confident they will continue providing food for all the chicks. We have already heard that at one site the adult female Peregrine was back feeding the chicks shortly after we left.” He added: “We would like to thank the local volunteers who worked hard to find two suitable foster homes and Raptor Rescue who did such a great job keeping the chicks alive and well.”

Anyone with information about who is responsible for setting the traps should call either West Midlands or Staffordshire Police. Alternatively, people can call Crimestoppers anonymously about either incident on 0800 555 111.