Many Bird Text Alert subscribers use our "control message" mechanism to interact with the service from their mobile phones when they're away from their computers. (If you're not familiar with the control message system, you'll find more information at www.birdguides.com/bta/guide.asp#control.) The system allows users to alter their service settings, and report rare bird news, using SMS text messages from their phones. This system has recently been enhanced, and this brief article outlines some the changes. 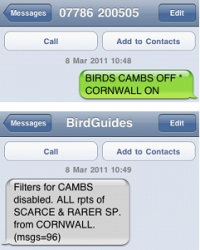 Previously, changes to your settings had to be made one by one, with each command sent as a separate text message. To save you money and speed up the process, the system now allows you to send more than one command in the same message.

For example, suppose you lived in Lothian and had Bird Text Alert set up just to send you reports from your home county. However, you've set off on holiday to the Highlands but forgotten to change your settings before you left (when you can, it's always easier and cheaper to change your settings via your computer at www.birdguides.com/textsettings). In the past, you'd have had to send two text messages, one to switch off messages from Lothian and one to switch them on for Highland:

BIRDS LOTHIAN OFF
BIRDS HIGHLAND ON

With the new system, you can send the two commands, separated by *, in a single message:

BIRDS LOTHIAN OFF * HIGHLAND ON

(you don't have to repeat the keyword BIRDS each time, though the system will ignore it if you do). Commands are obeyed in the order in which they are given.

All text messages are acknowledged by an automatic text, so that you know your instructions have been received and that the command has had the effect you intended. With this new system, a single message may prompt more than one acknowledgement text (each of which uses a text credit), but where there's room, the system will combine acknowledgements into a single text. In the above example, you'd have received the following single acknowledgement:

Filters for LOTHIAN disabled. ALL rpts of SCARCE & RARER SP. from HIGHLAND.

("All reports" and "scarce and rarer species" are the default settings for counties, unless you specify them differently; see www.birdguides.com/bta/guide.asp#counties for full details.)

Multiple and mixed regions and counties

The new system also gives you more flexibility to set more than one region or county in a single command. As another example, suppose you were off on a birding trip to Northern Ireland. You might be interested to hear about any rare birds that turn up within driving distance while you're there. Suppose you decide that this included any county in Northern Ireland but you'd also consider a trip to Counties Donegal, Monaghan or Louth. You'd simply text:

which would elicit the response:

By a similar process, you can also specify that you'd like to receive reports of a particular species in a particular area, simply by texting, for example:

which would prompt the response:

ALL rpts of WT-TAILED EAGLE from HANTS.

This is particularly useful if, as many users of the service are, you are set up for "First reports " within a certain category (for example, first reports of rare and mega species in Norfolk). With this kind of setting, you'll receive the first report of any species that qualifies, but not subsequent updates. This keeps the number of messages down, but suppose you were birding in Norfolk and received news of, say, a Surf Scoter that you'd like to keep tabs on. In the past, you could only ask for reports of species globally; so you could text BIRDS SURF SCOTER ALL to receive updates on this species, but you'd also receive updates on other individuals of the same species elsewhere – off the coast of Scotland or Ireland for example. If there happened to be several individuals around the British Isles at the time, this could mean you receiving unwanted texts. With the new changes, you can limit the updates to just the counties you're interested in. You can even allow for the bird wandering up and down the coast by specifying more than one county, e.g.:

Finally, the system is more forgiving of variations in word order and species and area naming than previously. So, by and large, you can specify your requirements in any order and the system will do its best to comply (though BIRDS always has to come first). So, the following:

We hope that "power users" of Bird Text Alert will appreciate the new opportunities these changes provide, and that you'll continue to find the service useful. If you're a subscriber and you'd like to try out some control messages, you don't need to spend a fortune on texts, either. Just go to www.birdguides.com/bta/simulate.asp and you can try as many instructions as you like – just don't forget to change your settings back when you've finished! And if you're not a subscriber, but you'd like to find out more, see www.birdguides.com/bta.