New information has come to light in the case of a satellite-tagged Golden Eagle that disappeared under suspicious circumstances in Scotland's Pentland Hills in January.

On 21 January, a GPS satellite tag fitted to the young eagle, known as Fred, suddenly and inexplicably stopped sending data close to a grouse moor in the Pentland Hills, on the outskirts of Edinburgh. Up until that point the tag had been working perfectly and was providing accurate and frequent location information about Fred's travels. Strangely, three-and-a-half days later, the tag began to transmit again for a short period, but astonishingly, it was in the North Sea, 15 miles offshore from St Andrews. No further GPS data have been received.

The researchers who had been tracking Fred's movements, including Dr Ruth Tingay of Raptor Persecution UK and broadcaster and campaigner Chris Packham, alerted experts at RSPB Scotland. The organisation immediately notified Police Scotland, who began an investigation into Fred's suspicious disappearance.

The analysis of new technical data, provided by the tag manufacturer, has now shed some light on the approximate location of Fred's tag during those three days of lost GPS transmissions.

Although the GPS transmissions were suppressed, the tag's technical data, which includes time and date, shows that it was still functioning and was periodically communicating briefly with a series of mobile phone masts closest to its then location. These data, giving locational information for the phone masts, suggest that in the days after Fred's disappearance his tag moved eastwards away from the Pentlands, along a route similar to that of the Edinburgh City Bypass and subsequently the A1 towards Haddington, before it travelled to the North Berwick area on the East Lothian coast. From there, it is likely that the tag went into the sea as the data then show that it began to connect with phone masts along the Fife coast, across the Firth of Forth. Later, the tag briefly resumed giving locational GPS transmissions, but by then it was well offshore. 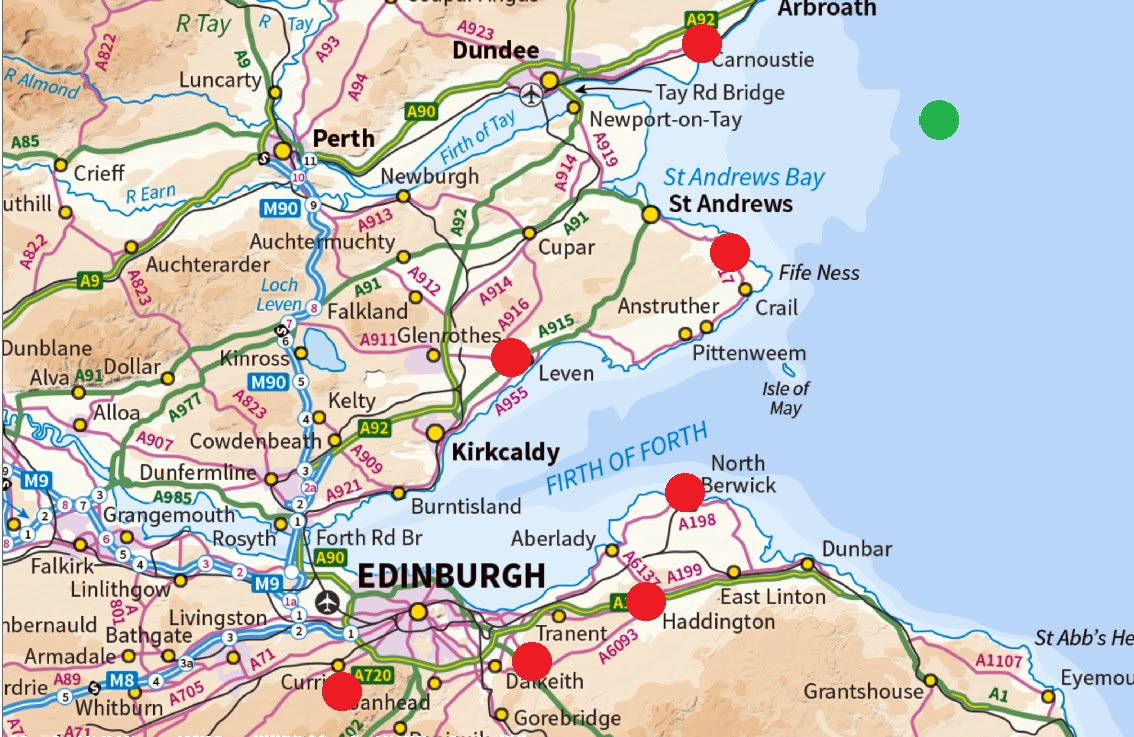 Analysis provided by the tag manufacturer shows the approximate location of Fred’s tag during the three-and-a-half days of lost GPS transmissions.

Dr Tingay said: "That someone might have been travelling around the Edinburgh City Bypass with a dead Golden Eagle in the boot of a vehicle is sickening.

"These new tags we're using to track Golden Eagles like Fred offer a highly sophisticated technical opportunity, not just to learn about the eagles' movements when they're alive but also, it seems, give an insight into the lengths someone will go to try and remove evidence to cover their crime."

Chris Packham added: "We don't know whether this tag was still attached to Fred as it travelled across East Lothian and into the North Sea, but we do know that the tag's movements are a clear indication of foul play.

"Whether it was an amateurish attempt to mask the illegal killing of Fred in the Pentlands by dumping the tag, and possibly Fred, in the North Sea to make it look like he had drowned, we'll never know. We do know that, once again, we've lost a young Golden Eagle in the vicinity of a grouse moor and nobody will be held to account.

"The Scottish government needs to do more, immediately, to protect Scotland's birds of prey. It's crystal clear that raptors continue to be killed and the criminals responsible think they are untouchable."

Ian Thomson, Head of Investigations at RSPB Scotland, commented: "This new information makes the probability of Fred's death being a wildlife crime even more likely.

"The continued denials of any suspicion around the case, and attempts at coming up with elaborate alternative versions of events, have been identical to those in virtually every other case where a satellite-tagged raptor has disappeared.

"It is a great shame that some representatives of the gamebird shooting industry, who profess to be 'true conservationists' and 'guardians of the countryside', are the same individuals who seek more to shoot the messenger than to face up to and marginalise the criminals who exist in plain sight in their community." 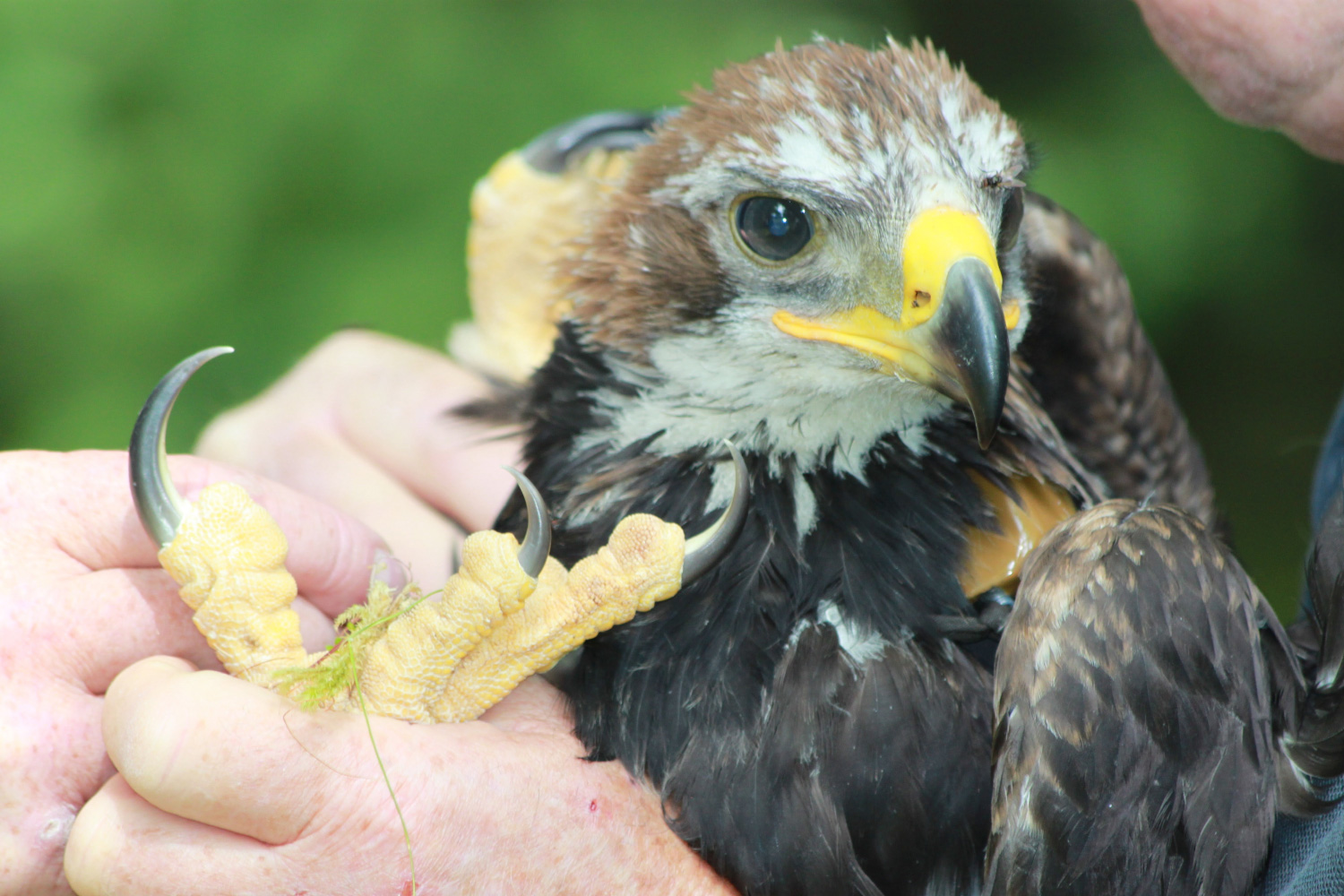 Fred was satellite tagged at the nest in June 2017 (image via Chris Packham).

Lothian MSP Andy Wightman concluded: "The evidence uncovered from Fred's satellite tag is sufficient to convince me that he died in suspicious circumstances. Further details may never be known, but it is beyond contempt that protected species such as Golden Eagles continue to be persecuted across Scotland.

"I urge all those who use the Pentlands Regional Park on a regular basis to remain vigilant and am extremely grateful to Dr Ruth Tingay and Police Scotland for their diligence and perseverance in a very difficult case."

Last year a Scottish government-commissioned report showed that 41 of 131 satellite-tagged Golden Eagles had disappeared (presumed dead) in suspicious circumstances in Scotland, predominantly on or near  driven grouse moors. In response to that report's findings, Cabinet Secretary for the Environment Roseanna Cunningham MSP ordered a review of grouse moor management practices with a view to introducing a licensing scheme for game-shooting estates.

Anyone with information about Fred's disappearance is urged to contact Police Scotland on 101, or the RSPB's confidential raptor crime hotline 0300 999 0101.

The April 2018 issue of Birdwatch magazine is a specially themed wildlife crime edition, with powerful messages from Chris Packham, Ruth Tingay and Rob Sheldon of Birders Against Wildlife Crime. You can order your copy online here.