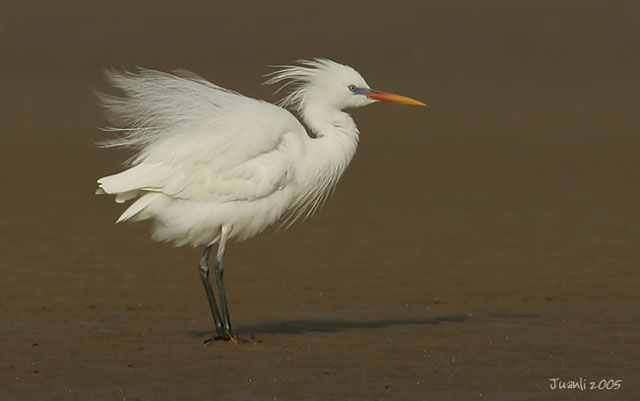 An important new breeding colony of around 100 pairs of Chinese Egrets Egretta eulophotes has been discovered off the Shandong coast of China, thanks to seabird survey work funded by a British Birdwatching Fair/RSPB Research Fund for Endangered Birds grant.

Researchers Qiao Yi-lun and Liu Yang of the Beijing Bird Watching Society came across the egrets amongst large breeding colonies of Black-tailed Gulls Larus crassirostris on the tiny (13.2 ha) island of Hailü Dao, which lies 1.6 km north-east of Rongcheng City, Shangdong. Images of the adult birds, their nests, eggs and chicks were recorded. According to local people, the egrets first nested on the island in 2001 and have been increasing in numbers ever since.

Chinese Egrets breed only on small offshore islands in Russia, the Korean peninsula and mainland China, and winter in Hong Kong, Macao, Taiwan, Japan, the Philippines and elsewhere in South-East Asia.

With a world population estimated at 2,600-3,400 pairs, the species is classified as Vulnerable. The new colony represents a significant percentage of this total, indicating the significant conservation value of the island, which is a famous location amongst wildlife photographers.

Although currently unprotected, egg-collecting is strictly prohibited on Hailü Dao, and there are no permanent settlements on the island.