Two fires that engulfed parts of a Leicestershire nature reserve are believed to be deliberate, fire chiefs have said.

At one point, fire crews had been struggling to reach the flames that were seen coming off the Outwoods nature reserve, near Loughborough. The two fires, which were reported within minutes of each other, were made on the evening of 10 April [2022] after two separate blazes were seen coming from the reserve around 7.30 pm. 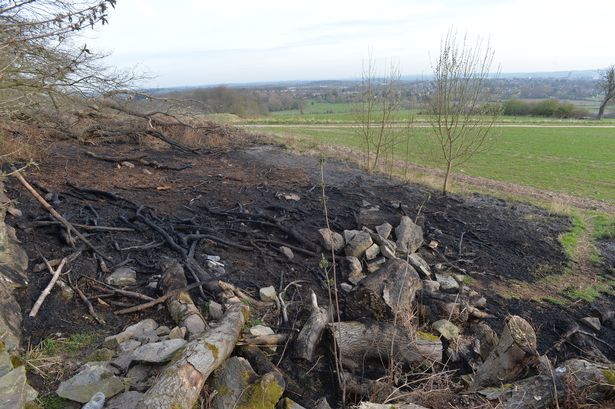 Fire damage the morning after at the seat of the fire at the edge of Outwoods (Leicester Mercury).

It prompted a response from fire crews, with one blaze needing extra support. Calls about the flames had been made from around the Woodhouse Lane area of Loughborough, but its location had seemingly proved tricky for crews. One eyewitness had told LeicestershireLive that they didn't "think they could get up there" as the fires raged.

However, in a statement Leicestershire Fire and Rescue Service (LFRS) confirmed that both fires had been reached and put out. They revealed that both appeared to have been set deliberately. A spokesperson said: "Both incidents have been reported to the police for them to investigate. We have extinguished the fires; there was no-one in the area while we were on the scene. The police are now dealing with the matter and will investigate as appropriate."

Leicestershire Police has confirmed that it is investigating the fires and has issued an appeal for information.