Multiple Corncrakes on Rathlin Island for first time since 1980s

For the first time in 30 years, it's been confirmed that there are two pairs of Corncrakes on Rathlin Island, Co Antrim. A male has been heard singing in one location on Rathlin each year since 2016 but, this summer, RSPB NI staff have recorded two breeding males in two separate sites on the island.

Rathlin is the only place in Northern Ireland where the birds have been heard in recent years. One of the sites holding a male – in Church Bay – is on land owned by an islander, but managed by RSPB NI, that has had nettles planted by staff and teams of volunteers to encourage the birds. 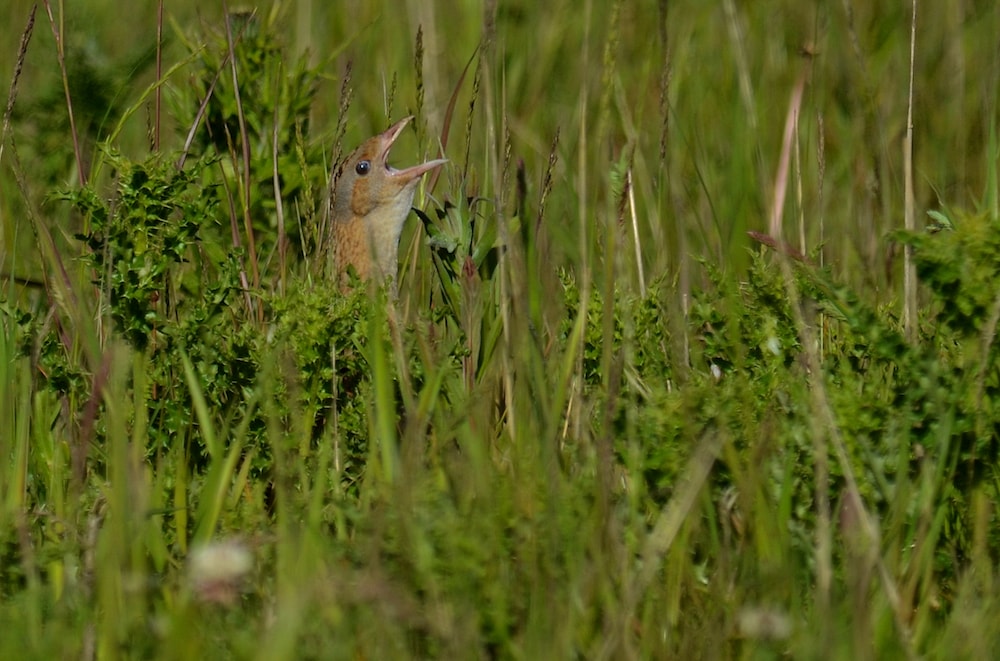 At least one male Corncrake has been present on Rathlin Island since 2016 (Martyn Jones).

RSPB Rathlin Island Warden Liam McFaul said: "It's fantastic and really encouraging that the work we’re doing for Corncrakes is making a difference. It's been an exceptional year because for the first time since the 1980s we have two calling Corncrakes and this is brilliant. The birds have two broods and the second brood will be hatching in late July.

"One male has been calling out in two or three different locations and then he's moving across the road to the other side and is calling quite a lot, all night long and quite often during the day. Because of this behaviour, this could indicate that there could be more than one female in that area and he's tending to two areas at once. But because the females are silent, we don't really know."

The second male Corncrake has been recorded on private land owned by wildlife-friendly farmer Richard Green and his family on the western end of Rathlin. McFaul continued: "We've been creating areas of early cover over the last 15 years or so. This has involved teams of volunteers on the mainland over the winter digging up nettle rhizomes because that's ideal habitat for Corncrakes.

"If you plant them, they grow early in the season and that encourages the birds to come in. Nettles are brilliant because it creates this open structure where the birds can hide below them and work away through the vegetation. The nettles hold a lot of invertebrates and insects that they can feed on so it's like their shelter, their hiding place and their food store all in one."

Farmer Richard Green added: “For me, it started four years ago when we had a Corncrake calling right through the summer. To hear that this year there are two pairs, one of which is on our land, is great. It shows us we must be doing something right for them. The way we farm, we’re sensitive to nature and the birds and we try to do whatever we can to help."