Moths Count has uncovered a real rarity in the Highlands! At a training session in May at Aigas Field centre, Mark Young and Roy Leverton were getting ready to talk about how to find and rear caterpillars. Many of the participants were also passing around pictures or specimens of moths to be identified and Andy Scott and Margaret Currie produced pictures of a medium-sized black micro, with a characteristically orange body, not realising that it might be rare. However Mark and Roy instantly recognised that it was the fabulously rare species Ethmia pyrausta, an almost mythical species of the Highlands. 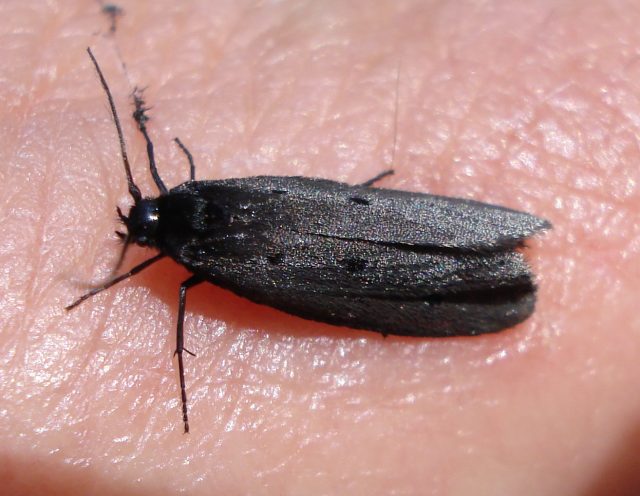 In 1853 a single specimen was found in the valley of the Shin, north of Inverness and that was the sole British record until Mark and one of his students unexpectedly trapped two specimens on the top of Glas Maol in the Cairngorms in 1996. Two more have since been seen nearby, one sitting on a snow patch, but no-one has ever found the caterpillars in Britain and it is an enigmatic and puzzling species. Andy and Margaret’s moth was found trapped by a leg in a spider’s web in early May near Loch Morie , close to Alness, not far from the Shin Valley (safely rescued from the spider). We can only think that the species has survived unseen in that area since 1853!

The caterpillars are supposed to feed on meadow-rue and it is now up to us to try and find out where the moth breeds, to try and make sure that its habitat is safe and it can survive there for the next 155 years!