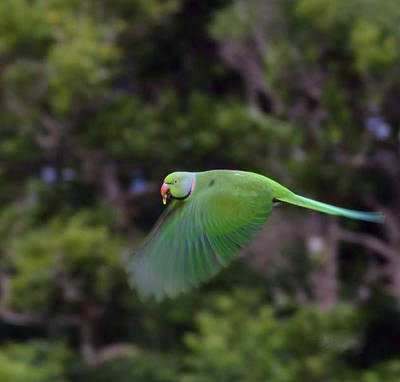 As the 2007 IUCN Red List of Threatened Species reveals the scale of the escalating extinction crisis occurring across the planet, an unobtrusive parakeet from Mauritius is showing that, with funding and dedicated fieldworkers, species can recover from the brink of extinction.

Released today, the IUCN Red List of Threatened Species reveals that unprecedented numbers of species are now threatened with extinction. For birds, the Red List is maintained by BirdLife International, who report that 1,221 species are considered threatened with extinction. The overall conservation status of the world’s birds has deteriorated steadily since 1988, when they were first comprehensively assessed.

Yet even among these severely threatened birds is a small number whose survival odds are improving, providing case-studies to others for how species can be successfully saved. The most encouraging recovery seen in the 2007 IUCN Red List of Threatened Species was Mauritius (Echo) Parakeet, once dubbed "the rarest parrot on Earth". Mauritius Parakeet –a green parrot, males of which have a bright red bill - was once down to just 10 birds in the 1970s, but today saw the World Conservation Union (IUCN) announce its move from Critically Endangered to Endangered.

"Mauritius Parakeet is an inspiring example of how species can be helped to recover even from the brink of extinction," commented Dr Stuart Butchart, BirdLife's Global Species Coordinator.

In the last century the species has suffered from a multitude of threats all of which contributed to substantial declines; yet concerted actions, involving local and international conservationists, the government and people of Mauritius –with support from an array of international funders- has seen the species’ chances of survival improve.

"Our work in saving other Critically Endangered birds on Mauritius has taught us that you must tackle the root causes of decline and be prepared to address these issues first," says Vikash Tatayah of the Mauritius Wildlife Foundation (MWF), the island's sole terrestrial conservation NGO.

For Mauritius Parakeet, these threats included introduced nest predators (in particular Black Rat), decline of the native fruits on which the parakeets feed (itself outcompeted by invasive non-native plants, and eaten by feral pigs), and a loss of suitable nesting sites.

"These parrots only naturally nest in old canopy trees, which are disappearing across the island," Vikash explains. "Many years of hard work went into tackling the shortage of nest sites and finally we've come up with a design acceptable to Echo Parakeets and requiring less maintenance. The parakeets now nest in artificial cavities more than the traditional nest cavities."

"The artificial cavities also control for invasive nest predators –another long-term threat to the birds," Vikash continues. "The boxes are rat-proofed, overhanging trees are trimmed, we poison for rats on the ground, and staple plastic sheeting around trees to reduce predation of eggs and chicks by rats. These are simple but essential measures to help get the population back on its feet."

This is the third such downlisting to occur on Mauritius in recent years due to the efforts of MWF. In 2000, Pink Pigeon Nesoenas mayeri, down to just nine birds a decade earlier, was downlisted to Endangered and now numbers 400 birds. Likewise, Mauritius Kestrel Falco punctatus, went from just four birds in 1974 and now numbers approximately 1,000 individuals.

On being asked the secret of their success Vikash answers: "It’s no use saying 'a parrot is a parrot, a pigeon is a pigeon'; instead we must ask how we can use the lessons we have learnt on restoring populations of other threatened birds – we must pass information on, learn from our experiences and the experiences of other projects worldwide."

The news is of encouragement to those working in conservation within the BirdLife Partnership, once again proving that with adequate investment and trained people on the ground, threatened species do recover.

Two weeks ago the first Mauritius Parakeet eggs of the season were laid and MWF is confident that, due to good native fruit season, a sufficient number of young parrots will fledge to maintain the population.

"Mauritius Parakeet is still Endangered – we still have lots of work to do," states Vikash. MWF will continue conservation work on the species until the Mauritius Parakeet population is self-sustaining, but by working to maintain habitats, control predators and promote biodiversity they hope to improve the survival odds of other species that too depend on the island’s biodiversity. "People included," adds Vikash.

"Like other species that have been saved from extinction, reversing the fortunes of the Mauritius Parakeet took painstaking research to identify the threats, sufficient funding and sustained efforts by dedicated fieldworkers to implement the necessary actions," said BirdLife’s Dr Stuart Butchart.

"Across the world there are dedicated people struggling to repeat this story for other species, but they need the resources to achieve this."