More birds in Indonesian households than in the wild, suggests study

More songbirds could be living in captivity on the Indonesian island of Java than in the wild, leading to the possible extinction of many species, according to new research led by Manchester Metropolitan University and Chester Zoo.

Some 75 million birds are kept as pets in Java, threatening to wipe out some wild bird populations. Across South-East Asia, thousands of songbird species are extracted from the wild for a variety of reasons, but many are sought after to enter into singing competitions or to be kept as ornamental pets. 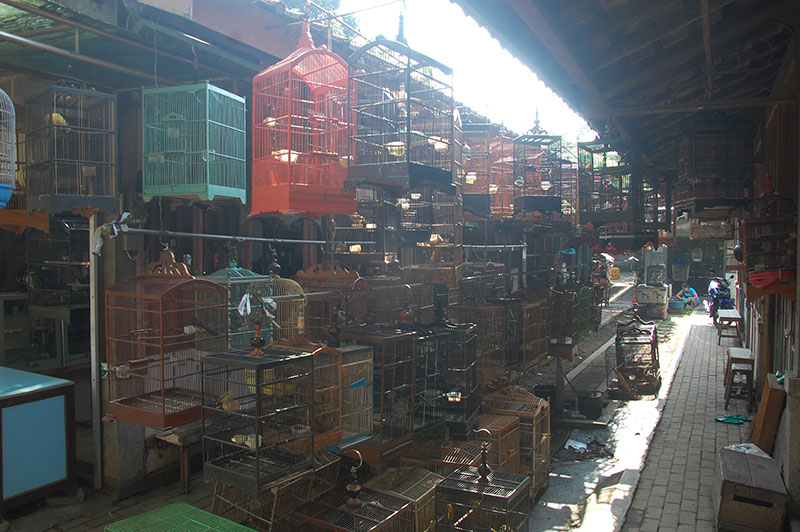 The biggest source for this demand is Indonesia, where levels of ownership have put a huge drain on wild populations causing an 'Asian songbird crisis', which may now be approaching a tipping point, threatening wild bird populations with extinction.

Manchester Metropolitan PhD student and Chester Zoo Conservation Scholar Harry Marshall led a team that surveyed 3,000 households across the island of Java – Indonesia's most densely populated island and home to more than half of its 260 million population. For many Indonesians, bird keeping is a popular pastime.

His research, published in Biological Conservation, investigated the prevalence and patterns of bird keeping. He found that the proportion of bird-keeping households has increased over the past decade, and that a third of the island's 36 million households now keep birds.

Harry said: "The removal of birds from the ever-shrinking forest habitat on such a large scale may be extremely damaging, not only causing bird extinctions but also threatening the important ecosystem services they provide such as pollination.

"The trade in songbirds is estimated to be worth tens of millions of dollars to the Indonesian economy, so it is no surprise that it is a key regional source of both supply and demand for songbirds, with hundreds of markets running across the archipelago, selling more than 200 different species – the majority of which are native to Indonesia."

The illegal trade in wildlife affects species in almost every country, with a growing number of species threatened with extinction because of demand for pets, medicine or ornaments. Birds are one of the most traded groups with over 3,000 species, a third of all surviving species, reportedly affected by the trade. 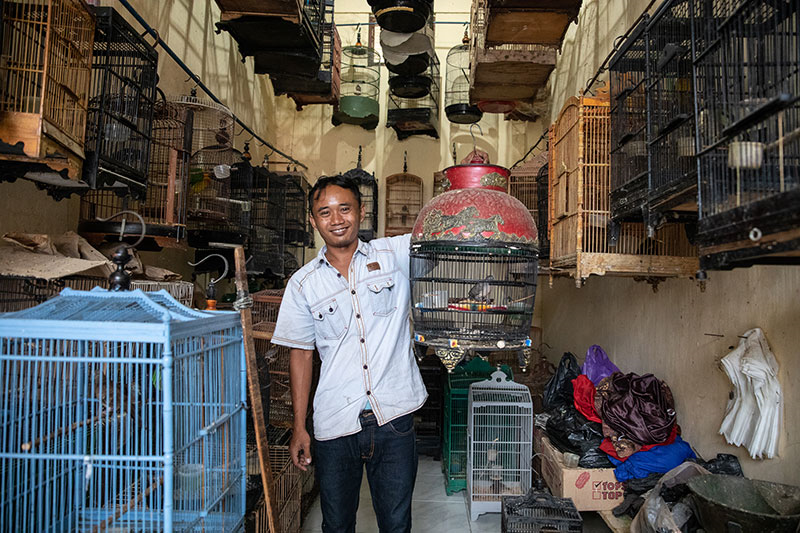 A bird seller poses with cages in Java (Gabby Salazar).

Alexander Lees, Senior Lecturer at Manchester Metropolitan University and a study co-author, commented: "a major source of uncertainty is the significance of the decrease in numbers of some wild-caught birds like Orange-headed Thrushes and Long-tailed Shrikes – it could either reflect a reduction in demand for such species, or simply a lack of supply as the region is drained of wild birds."

Keeping songbirds has a long tradition in certain parts of Indonesia and is seen as an important part of a balanced life for Javanese men – the most populous ethnicity in Indonesia. The researchers found that bird-keeping is more common in the Eastern provinces of Java with the largest Javanese populations.

In recent years however, bird-keeping has evolved into a modern hobby, often referred to as ‘Kicau-mania’ – singing contests for the birds. The competition has become a ubiquitous part of urban life, where birds’ songs, or Kicau in Indonesian, are judged on melody, duration and volume.

These events happen all the time across the island with some people willing to pay thousands of dollars for prize-winning songsters that could win them as much as $50,000 in the top contests. Notable members of Indonesia’s political elite are also keen songbird enthusiasts, supporting the creation of the high-end songbird contests exclusively for White-rumped Shamas, making it one of the most popular and expensive birds with over three million owned across households. Not surprisingly, the species – once widespread in Java – is now almost exclusively only found in captivity in Java, with evidence suggesting birds are being illegally imported from neighbouring countries.

Species not native to Indonesia, such as canaries and lovebirds, are also are among the most commonly kept across Java and bred in captivity, so the demand for these birds does not affect wild populations. Lovebirds – small parrots of African origin – have seen a seven-fold increase in popularity over the last decade, suggesting that demand is adapting to the reduced availability of other species in the wild and could be a way to meet demand and maintain wild bird populations.

Stuart Marsden, Professor of Conservation Ecology at Manchester Metropolitan University, said: "Overall bird ownership shows an increase in the last decade but the high prevalence of bird keeping, the higher species diversity and the expanding variety of motivations for keeping birds in urban areas suggest that bird keeping is likely to increase in prevalence as the Indonesian population continues to become more urban.

"The songbird trade has become a major threat to the survival of South-East Asian songbirds. Millions of these beautiful birds are captured illegally every year and we need to act now before we reach the point of no return."

Andrew Owen, Curator of Birds at Chester Zoo, added: "We're well aware that songbirds are under enormous threat from illegal trapping in Indonesia. Yet to see the new figures in this study is really startling. Make no mistake, this is a crisis." 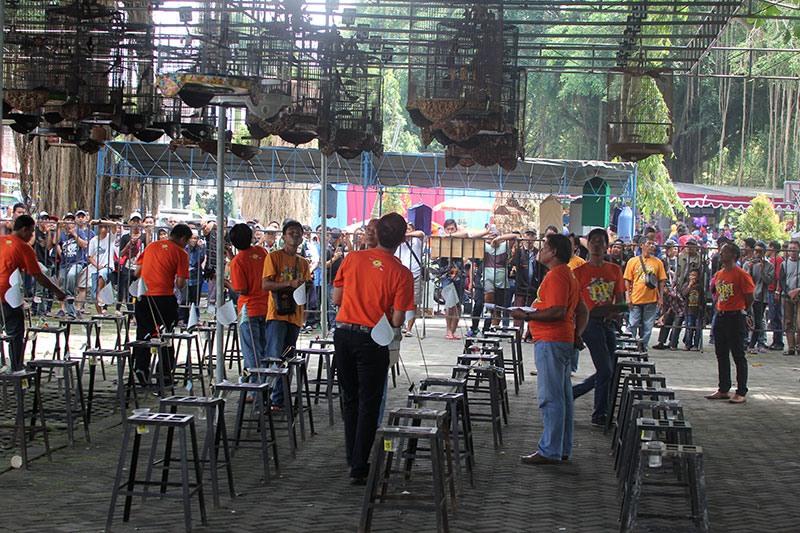