In 2015, seven pairs of Montagu's Harrier are known to have nested in Norfolk, East Yorkshire and South-West England. Pairs have also bred in Lincolnshire and the Midlands in the recent past. It is essential that the small number of breeding attempts made this year are identified and protected from accidental damage, disturbance or persecution, to give these birds the best possible chance.

Data from tracked individuals has shown that these stunning birds spend the winter in Senegal. In 2014, an adult male Montagu's Harrier, named Mark, was tagged in South-West England, allowing the RSPB to track the migration route they take for the first time. The species arrives in the country in May to breed, before returning to Africa in August. It is possible to see on passage, particularly on the southern and eastern coasts of England. They breed in the south-west and east of England on lowland farmland, particularly winter cereals, oilseed rape and field silage.

The core population of Montagu's Harrier usually returns to the same nesting areas each year. The RSPB has been working successfully with the owners of those sites for more than 30 years — however, it is very important that any new or unknown nests are located. 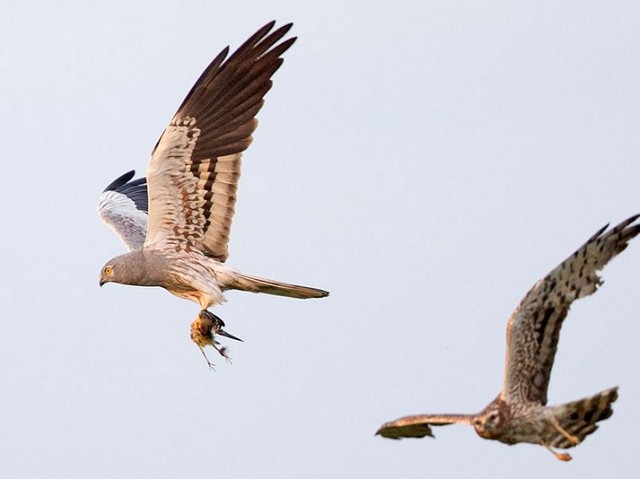 Mark Thomas, who leads on Montagu's Harrier conservation work for the RSPB, said: "The UK population is currently teetering on the brink and we are determined to find out why. Last year, the RSPB received more than 70 enquires, some of which lead to the discovery of a new nest site.

"Farmers and birders can really help with the conservation of this threatened species. Now is the best time to witness the adults' airborne courtship before they establish their crop nests and become harder to see. If you are fortunate enough to spot one of these breathtaking birds then please contact the hotline to let us know."

Any possible sightings of Montagu's Harrier can be reported to the hotline on 01767 693 690 or emailed to wildlife@rspb.org.uk. Details should include the date, six-figure grid reference if possible and a contact telephone number. All reports to the hotline will be treated in the strictest of confidence.