Mixed fortunes of Britain's butterflies in 2010

After some terrible years recently, 2010 has been an encouraging one for Britain's dwindling butterfly population. Despite this, scientists at Butterfly Conservation, who are analysing the year's data, warn that most butterflies continue to face serious long-term decline.

The good news is that some of our most threatened butterflies have done well, especially where conservationists have been hard at work.

The Heath Fritillary, one of the rarest butterflies in Britain, would almost certainly have become extinct if it wasn't for the work of conservation bodies, including Butterfly Conservation. It was on the brink of national extinction in 1980, reduced to less than 50 colonies, most of them very small. Thanks to the research and advice of Butterfly Conservation, the number of colonies in the butterfly's stronghold in Blean Woods (Kent) has increased from just 14 in the early 1990s to 31 today, returning the Heath Fritillary to pre-1980 levels. Populations are also recovering well on Exmoor, thanks to new management by the National Trust. Despite these successes, this butterfly, like many others, requires constant habitat management to maintain its populations.

The beautiful Marsh Fritillary, a threatened species in Europe, has begun to thrive again on Dartmoor and has spread to many new areas. In Dorset, the butterfly had its best year for decades thanks to conservationists and farmers, who are working together to get the right habitat management in place. This typically involves light grazing by hardy cattle or ponies. In Scotland, such partnerships were extended to over 2,000 hectares of potential Marsh Fritillary habitat during 2010, while in Northern Ireland, significant new colonies of Marsh Fritillary have been found in Counties Antrim and Tyrone. 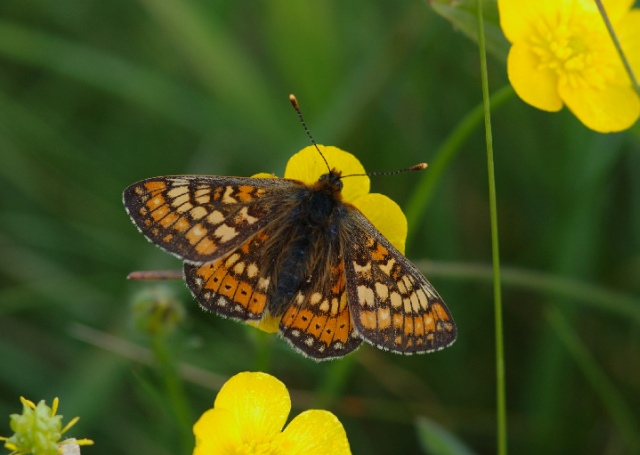 Another butterfly that has fared better this year is the Silver-studded Blue. This threatened species has reappeared at several sites where it was thought to be extinct, including in Cornwall, Hampshire and Berkshire. The Common Blue has also had an excellent year, especially its second brood in August. It was reported widely and recorded in very large numbers in southern Britain.

The once-common Small Tortoiseshell, whose populations have been ravaged in recent years, showed welcome signs of recovery in some areas of the UK. In eastern England, the big butterfly success story of 2010 was the Silver-washed Fritillary, which has recolonised the region after many decades, while in the Midlands and Yorkshire, the threatened Dingy Skipper stole the show, with booming populations and new colonies, particularly on brownfield sites. North of the border, the Comma continued its dramatic spread.

However it has not all been good news for the butterflies of Britain. The Lulworth Skipper, one of the smallest butterflies in Britain, has continued a run of very poor years and Large White numbers have also decreased after a fairly successful 2009. Our three regular visitors from overseas, the migratory Clouded Yellow, Red Admiral and Painted Lady, have all had poor years, a stark contrast to the bumper migration last year with, at the peak, up to a billion Painted Ladies in Britain.

Butterflies are important as indicators, alerting us to underlying problems with the environment. If butterfly numbers are falling year after year, inevitably other wildlife is also in decline. Richard Fox, Surveys Manager at Butterfly Conservation, said: "The weather has been better for butterflies this year — a cold winter and a hot June and July seemed to benefit many species. However, although the weather is an important factor every year, the massive decline of Britain's butterflies will only be reversed by improved habitats and conservation on the ground. If habitats are protected and managed well then, when the weather is suitable, butterflies can thrive and recover some of the ground they've lost over the past 50 years. The role of Butterfly Conservation is to help get the habitats right so that butterflies can 'make hay while the sun shines'."

Last week, a BBC Natural World documentary looked at some of these species and asked how our passion for butterflies is helping to conserve them, and the habitats around them. Filmed for the first time in HD, the programme featured extraordinary slow-motion photography of butterflies and revealing time-lapse sequences of their miraculous body changes. It explored the incredible history Britain has with the butterfly and how people across Britain are helping to conserve some of our rarest species, including the Purple Emperor and Large Blue.

To find out more about butterflies and how you can help butterflies, visit www.butterfly-conservation.org.