History and wildlife presenter Miranda Krestovnikoff has been elected as the new President of the RSPB, Europe's largest nature conservation charity. 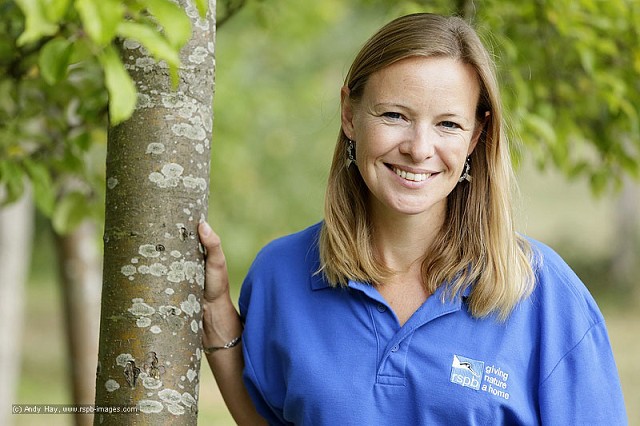 The RSPB hopes that Miranda's enthusiasm and expertise will inspire more people to become interested in wildlife and do their bit to give nature a home. RSPB members at the RSPB's AGM in London on Saturday [12th October] elected Miranda as their new president. She is the third female president since the organisation was founded in 1889, and takes over from fellow TV presenter Kate Humble. The charity has now had a female President for more years than a male President.

Miranda is best known as a wildlife expert on BBC 1's The One Show and as one of the original Coast team members. She has also recently presented BBC1's Britain's Big Wildlife Revival, appeared on Celebrity Masterchef and become a regular on BBC Radio 4's Costing the Earth, Living World and Tweet of the Day.

Her interest in nature stems from a childhood spent outdoors in her family garden in Buckinghamshire and roaming around nearby Burnham Beeches, which led her to study a Zoology degree at Bristol University and volunteer with various wildlife organisations. A trained diver, Miranda is interested in wildlife both above and below the waves.

"Being asked to be President of the RSPB is a huge honour and a massive responsibility, but I'm very much looking forward to the challenge. When I was first asked if I'd consider putting myself up for election, I felt very flattered.

The charity's aims and beliefs fit perfectly with my own — we can all play our part in giving nature a home and the only way our future generations will want to play their part is if they feel connected to nature from an early age.

I am a genuine nature lover — I enjoy nothing more than spending time outside with my family and showing my children what's out there — be it a glamorous, majestic bird of prey or a quirkier creature like a Slow Worm."

In her new role, Miranda aims to increase support for the RSPB and build wider awareness of its work. She wants to celebrate British wildlife and raise awareness of the fascinating creatures we have on our doorstep. In particular she wants to enthuse children about nature, and help adults learn how to enthuse their children.

She says: "Many people still don't realise that whales and dolphins can be seen from UK shores and that we have some of the most endangered birds in the world above our heads. I hope that, through my presenting work and opportunities with the RSPB I can spread this message even further and that everyone finds it as exciting as I do!"

Mike Clarke, RSPB Chief Executive says: "The start of Miranda's RSPB Presidency comes at a time when nature is facing huge challenges. To meet these challenges we need to grow support for nature by inspiring more people to enjoy it, care about it and save it. Miranda brings a natural ability to enthuse others about nature and we are pleased to welcome her as our new President. We're sure she can help encourage more people to enjoy wildlife — be that feeding their garden birds, visiting nature reserves or getting involved with some of our campaigning work."

Miranda takes over from Kate Humble, who has served four years as RSPB President.

Mike Clarke says: "On behalf of the whole organisation I'd like to thank Kate for her time as RSPB president. Kate made an important contribution to our conservation work by spreading her enthusiasm for nature and wildlife to others and increasing our support. She will continue to support us in any way she can and we look forward to our paths crossing in the future."